Mailboxes are not Bulletin Boards. Street Trees Belong to Us All. Norman Rockwell’s Paintings Do Not. 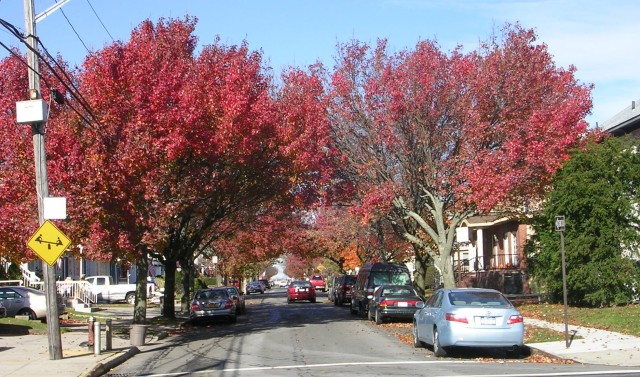 Home values are affected by many factors.  Exclusive zoning is critical, and a tidy-looking, tree-shaded street scene contributes value to all the homes located on a particular block.

When I was looking for a new apartment six months ago, the outdoor surroundings at each location seemed almost as important to me as the interior features of the apartment itself. I chose a relatively quiet block with a lush, arching canopy of maple, pear and plane trees.

I have noticed the disappearance of at least three street trees on my block since I moved in six months ago; when I asked around, someone told me that at least one was removed by the private homeowner by choice.  As the city’s Million Trees Project continues to plant thousands of new trees, everyone needs to be reminded that the trees we already have are precious, as well.  Homeowners are encouraged to water and fertilize the street trees in front of their homes properly, like good stewards, but must contact the city if a tree falls, becomes diseased or loses a limb.  Street trees are not private property.  These living organisms, and the patch of grass or dirt they inhabit, belong to the city.

Street trees are not the only public property in a residential neighborhood. Mailboxes belong to the taxpayers, as well.  Federal postal regulations govern them.  Those olive green metal “traffic control boxes” installed at eye level on the poles holding up traffic signals belong to the City Department of Transportation.  The red fire boxes are public property, as well.  Several weeks ago, writing on this blog, I mentioned the deplorable condition of some of the U.S. Postal mailboxes in the western end of the peninsula, particularly the one in the heavily visited location in front of PS 114 in Belle Harbor.  Periodically, it seems to become a target for graffiti “artists.” Fortunately, it was beautified in the past several weeks, so it doesn’t look like this anymore: 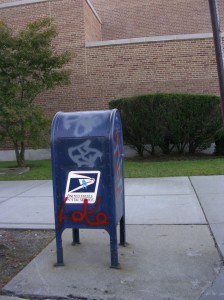 Shortly before the election, I noticed that political campaign stickers had been placed on mailboxes.   Flyers for several businesses started appearing on the makeshift “bulletin boards” as well.  Residents have always posted flyers for yard sales and missing pets on utility poles, and they are usually good at removing them after the events are over.   If they are left to hang, it looks very messy, and such postings technically violate city sanitation rules or federal regulations (in the case of mailboxes).

We’ve got another type of outlaw posting here on the peninsula of late.  Perhaps you’ve seen the nice surf photos that have been glued onto the ugly plywood construction fences in the area by a local artist known only as “Reid.”  There’s even one on a fence near a home on Rockaway Beach Boulevard in the 130’s, and–of all places–on the plywood barricade at The Wave.  With all due respect, your photos are nice, Reid, but be careful out there; The Wave owns that space and newspapers are in the business of selling space.  That’s how I pay my rent.  It may start with an “R,” but this is Rockaway, not Red Hook.  Why not ask for permission first?

Of course, it’s also a violation of federal copyright law to sell bootleg DVDs.  I don’t see any attempts to enforce those laws locally, either, although there is a rather notorious group of “vendors” who regularly frequent MTA subway cars and businesses near Beach 116 Street selling what does not legally belong to them.  Surprisingly, they find plenty of people willing to buy.

And let’s face it, you don’t have to look for folks freshly arrived on a boat from Asia who don’t speak a word of English to see blatant disregard for intellectual property rights.  Even the local newspapers in Brooklyn and Queens, who should definitely know better, often get into the act.  If a local paper runs a color ad that is enlivened by images of the “Sesame Street” gang or Sanrio’s ubiquitous “Hello Kitty,” take it from me, they probably have no license to do so.   And unless I’m missing something, Norman Rockwell’s famous series of paintings that appeared on the covers of The Saturday Evening Post over four decades (from the 1930’s through the 1960’s) are still protected by copyright.  Yet there it is on the cover of this week’s Rockaway Point News–Rockwell’s “Freedom From Want” (the famous Thanksgiving Dinner illustration).  They probably got a bargain-basement license, I’m sure.  You know how flexible those starving artists like Norman can be, when they want to get their art out there…

Back to mailboxes.  A request to all our neighbors–please don’t post flyers on them. 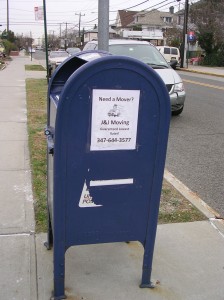 Mailbox on Newport Avenue in Rockaway Park--Need a Mover?

There are several bulletin boards in local banks and stores, and many businesses will consider posting a flyer in their store window for a regular customer who is publicizing a not-for-profit event or trying to get a small business off the ground.  The sanitation department periodically issues tickets, and in mainland Queens, even local charitable groups have been charged with littering for posting flyers on signposts and telephone poles.

Mailbox on Newport Avenue in Rockaway Park–Need a Tutor?

rarely steps up to this task, which is surprising considering that the boxes are an anachronism and provide a limited service to a shrinking population of users, it falls to the homeowners’ groups to recruit volunteers to carry out the job of painting over the graffiti, promptly.  Experience proves that when graffiti remains, it generally leads to more vandalism.  Let’s nip this problem in the bud.

My interest in the local mailboxes dates back to 2002, when I first noticed an olive green metal structure on Newport Avenue near PS 114Q called a “relay box.”   These were not receptacles for deposit of envelopes to be mailed, but had been used by the Postal Service to drop off bags of mail for carriers along each route.  There used to be a mail relay box on Newport Avenue near Beach 136 Street, and it was tagged with white spray paint from the time I moved to Belle Harbor.  Upon investigation, it turned out that the relay boxes were not even being used anymore, as most mail carriers had been issued vehicles for making mail deliveries.  The Postal Service quickly removed the eyesore; an interesting enough story to attract the attention of The N.Y. Daily News.  Here’s the link to their article:   http://www.nydailynews.com/archives/ny_local/2002/07/31/2002-07-31_new_address_for_eyesore_mail.html

We then moved on to look at the blue mailboxes. This was back in the “good old days” 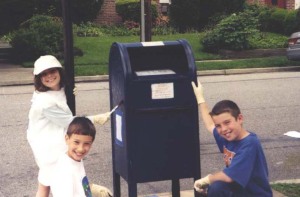 when my children were younger, way shorter, and didn’t mind wearing hand-me-down sweat pants to school every day.  They and their friends were also malleable enough to be intrigued by the idea of carrying out a voluntary service in the community by beautifying this public property with a fresh coat of paint to cover the graffiti. To do the task correctly, we had to acquire cans of government-issued U.S. Postal Service blue enamel.  It took rather a long time to get the paint, if I recall correctly.  Congressman Weiner had to intercede for us.

Weiner's With the Cleaners!

Talking About How We Can Stop Graffiti

We’d better get started planning for a spring spruce-up of the mailboxes in the area.  There’s a different postmaster now.  You know these bureaucrats. We’ll probably have to start from scratch.

You've entered the cyber-locale of Vivian Rattay Carter, a grant writer employed by Women's Housing and Economic Development Corporation in The South Bronx. I've lived and worked in the New York metro area since 1979, in diverse places like Astoria and Rockaway Beach (Queens), Kensington and Windsor Terrace (Brooklyn), Grand Street and Tribeca (Manhattan), and Norwood, Woodlawn, and Riverdale (The Bronx). I treasure the amazing parks, architecture, and cultural institutions of our multicultural city, as well as the musicians and music lovers who enjoy congregating here.
View all posts by rockviv →
This entry was posted in Business and Economics, Creatures of the Planet (Non-Human), Meet Your Fellow Man, New York City Government, The Land We Share, The World of Human Beings, U.S. Government and tagged community, Congressman Anthony Weiner, newspapers, NYC, Rockaway. Bookmark the permalink.