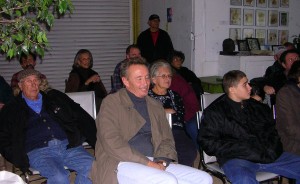 They are not running for President of the United States, but being a board member of the Rockaway Artists Alliance is a pretty prestigious slot.  Over the past few weeks, the politicking within the arts community on the Rock has intensified–it’s starting to look a bit like the glitzy promotional campaigns leading up to the annual vote on the Academy Awards.  For your consideration… 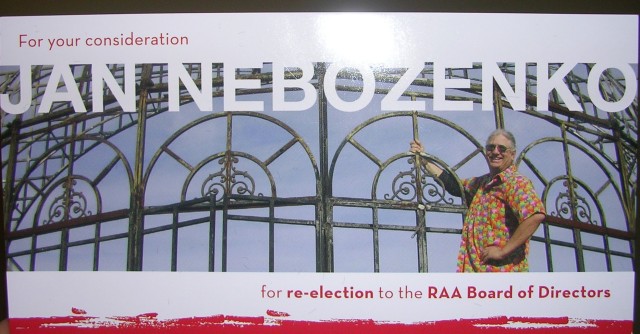 For Your Consideration--A Candidate Campaign Appeal

On Monday evening, December 13, at the annual members’ meeting and holiday party of the RAA, new board members and officers will be elected, and it’s a hotly contested race this time around.  In my view, a hallmark of a dynamic group is the willingness of volunteers to battle each other for leadership roles without salaries.  All of the candidates have prepared written summaries of their credentials that have been e-mailed to RAA members.  One candidate, Jan Nebozenko, demonstrated his artistic flair with a glossy, four-color campaign card that states his vision for RAA’s future.  Long-time RAA member Joan Boudreault distributed a flyer endorsing Nebozenko and four other candidates, including the critically acclaimed watercolorist/print-maker–Christian Le Gars; long-time board members Janet Dever and Martha Elliott Killian; and newcomer Gary Russo.   There are other  accomplished artists and long-time, dedicated RAA members running, as well.

It’s interesting to see the varied personalities, skills and perspectives the candidates bring to the group.  An old Chinese proberb applies to deciding who should sit on the Board of RAA–a good leader knows the way, shows the way, and goes the way.   Groups are always better off, in my view, when they choose board members who have a nice blend of vision and practical experience.

If you are an RAA member, be sure to vote–there’s even an absentee balloting procedure.  Gotta’ love the RAA! 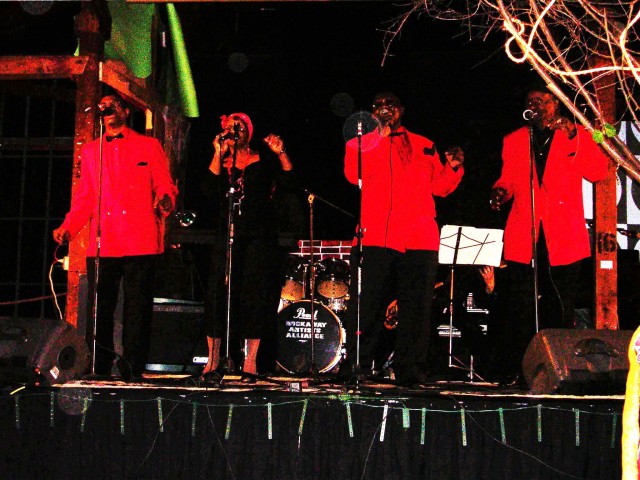 Speaking of long-time RAA board members, another candidate is James McKay, former singer with the Rock N’ Roll Hall of Famers, the Flamingos.  McKay is still out there on stage.  He and his talented singing group “Seaside” came to RAA for a free concert Saturday afternoon, performing outstanding cover versions of many 50’s and 60’s doo wop classics, such as–you guessed it–“Under the Boardwalk.”  The audience was small, but enthusiastic.  You can sample the group’s sound (or purchase a recording) at the website www.cdbaby.com. The singers and instrumentalists in the ensemble, in addition to McKay, include John Jones, Adele Lee, Melvin Shepherd, the Arthur Sterling Trio, and Bobby Martone.

2011 Officers and Directors of MyRockPark

The election for officers/board members of My Rock Park (formerly Rock. Pk. Homeowners & Residents) was a snooze, compared to the pulse-raiser at RAA. On December 2, the uncontested slate of candidates was presented and the secretary cast one vote to make it official.  Assemblywoman Audrey Pheffer then delivered the oath of office to the group’s new leaders.

I have been impressed by the work and enthusiasm of the current leaders of My Rock Park, and decided to re-join the board (after serving previously, during the fabulous “Eddie Re years” in 2002-3).  Also elected:  incumbent Kristin McMorrow, plus new directors John McCann, Brian Becker, Harold Paez, Jr., and the group’s new officers–President Noreen Ellis, Vice President Rick Horan, Treasurer Maureen Walsh, and Secretary Pete Stubben. 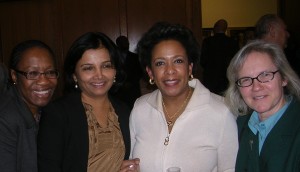 With all these elections afoot, I envy a good friend and former colleague of mine in the law biz, the incomparably classy Loretta Lynch, who doesn’t have to worry about running for office–just being confirmed by the Senate every 4 years.  Loretta was sworn in as the U.S. Attorney for the Eastern District of New York at a ceremony on Monday, December 6 at Brooklyn Law School.  Attorney General Eric Holder was an honored guest at the event.  It was a sea of gray and navy suits, as you can imagine.  I decided to add some color by wearing forest green, and Loretta also stood out from the crowd in a cream-colored, two-piece suit-dress.  It was a really joyous occasion, with Loretta’s whole family up from North Carolina to cheer her success!

The Atmosphere is Always Festive for the Fresh Ham Dinner!

About 100 neighbors enjoyed the fresh ham dinner and Christmas Bazaar at First Congregational Church on Saturday.  A new volunteer chef, Eric Smith, stepped up this year and worked all day in the kitchen to deliver on the promise that this year’s meat would be the most tender and delicious we’ve ever tasted.  It was.

Four hard-working “church ladies” have been helping to anchor this event for decades–Roberta McHugh (fresh-baked cookie and cake purveyor); Pat Warren (handmade soaps and lotions); Lillian Stuart (hand-crafted Christmas ornaments); and Peggy Koli, who sells scrumptious fresh-baked breads, home-made jams and other canned goods, much of which is produced from the bounty grown in her Rockaway Beach garden each summer.  Blackberry jelly and green beans marinated in fresh dill are some of her specialties.

Community Board 14 meets this Tuesday, Dec. 14 at 7:30 p.m. at the Knights of Columbus, 333 Beach 90 Street.  On Wednesday, Dec. 15, the 100 Precinct Community Council gets together, also at the K of C at 7:30 p.m., and that could be an interesting one, with the extremely rare charges of police brutality against two 100 Precinct officers being alleged by the now infamous “Rockaway Beach Dog Walker.”  I don’t know what the facts will show in that case, and it’s regrettable that the situation obviously got out of hand, in terms of the degree of force used.  But I believe that we, as a community, need to help the police come up with some strategies to address the rampant disregard of the pooper-scooper law on this peninsula.  Signage obviously does not help, although we could take a lesson from our friends across the pond in the UK on how to put out an effective message.  Take a look at this:

Another worthwhile suggestion is to install bag dispensers in various locations along the boardwalk.   An effective deterrent (but one that might not withstand legal scrutiny) would be to confiscate the violators’ pets and put them up for adoption–now that would get these inconsiderate louts where they live!

I have another solution–the cops could deputize a squad of early-morning joggers and walkers with armband cameras.  I exercise several times a week during the early morning hours, and regularly observe not very neighborly “neighbors” letting their dogs urinate and defecate all over the verdant grasses of Rockaway Beach, Rockaway Park and even–gasp–Belle Harbor.   It doesn’t matter whether it’s a tree lawn, a front lawn, a church lawn, a school yard, or the Veterans’ Memorial Circle.  I always pause to verbally object and confront such cads, and it’s always the same response, in so many words–my dog’s comfort is important–in fact, it matters more than your silly grass, so just go away.

OK, I’ll go away, as soon as you smile…You’re on candid camera!

You've entered the cyber-locale of Vivian Rattay Carter, a grant writer employed by Women's Housing and Economic Development Corporation in The South Bronx. I've lived and worked in the New York metro area since 1979, in diverse places like Astoria and Rockaway Beach (Queens), Kensington and Windsor Terrace (Brooklyn), Grand Street and Tribeca (Manhattan), and Norwood, Woodlawn, and Riverdale (The Bronx). I treasure the amazing parks, architecture, and cultural institutions of our multicultural city, as well as the musicians and music lovers who enjoy congregating here.
View all posts by rockviv →
This entry was posted in Local Government-Rockaway Peninsula & Broad Channel, The Arts and Entertainment and tagged community, Lawyers, local news, music, MyRockPark, Non-Profit Management, Police, Rockaway, The Arts. Bookmark the permalink.