Let’s face it–this Wisconsin controversy is pretty important, and something called “The American Dream Rally” sounded intriguing to me.  It was set for Saturday, February 26 in City Hall Park, near my favorite old stomping grounds in Lower Manhattan. So I got up early (for a weekend), caught the Q35 bus to the Junction, then boarded the 2 train, to check out the action.  I wanted to understand who was organizing the local opposition to the breathtaking roll-backs being proposed at state and federal levels with respect to women’s rights, workers’ rights, and public broadcasting, for starters. 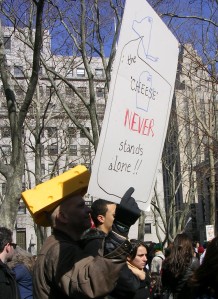 When I arrived at City Hall Park, I found out that MoveOn.org was the primary organizer of the American Dream Rally, and that there was a second protest  planned for later in the morning at Foley Square, a few blocks away, spearheaded by Planned Parenthood.

MoveOn is a progressive grass-roots Democratic group that dates back to 1998.  During 2008, the group became the champion of Barack Obama, pretty much dooming Hillary Clinton’s chance of succeeding in the primaries.  Though I had gotten involved as a MoveOn volunteer, I withdrew from the group when they failed to support her, and left the Democratic Party two years later.

The MoveOn rally featured the new darling of the left.  He’s the king of Brooklyn and Queens and the pride of 43% of registered voters in the west end of the Rockaway peninsula–Congressman Anthony Weiner! 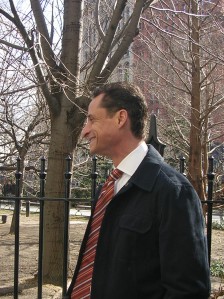 In fact, Weiner travels so well that he was virtually the only politician (besides Jerrold Nadler) who appeared on the podiums at both rallies in Lower Manhattan.  He was one of the first politicians to appear, and probably the best and brightest. Most of the other pols seem to repeat the usual catch phrases, which begin to sound hollow and meaningless, at least to me. 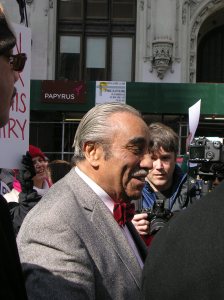 Unfortunately, MoveOn lost me with Charlie Rangel.  Sorry, but that rent-stabilized apartment thing is a deal-breaker.  Standing inside the bullpen set up for speakers at City Hall Park (oh, the privileges of blogging!), I got to look at the back of Rangel’s head silhouetted against the canyons of lower Broadway, and the lovely co-op building with a great view of the Brooklyn Bridge where I lost my shirt during the early 1990’s real estate downturn.  So much for the American Dream.  Never saw Charlie Rangel lose money on Manhattan real estate.  No sir.

Hyperbole from the Left--The Trough Knows No Party Lines

There was another strange parallel between the rally’s location and my own personal pursuit of the American Dream.  It all took place in the shadow of 26 Federal Plaza (now called The Jacob Javits Building), where I started my professional career in 1980, working for the National Labor Relations Board.  In that decade, we still conducted huge representation elections in many major hospitals, one in professional sports (remember the U.S.F.L?), and even at an international bank.  Then came Ronald Reagan…

Some thirty years later, the labor movement is a shadow of its former self.  I’ve often asked–where was the labor movement up until now?   Where were they when industry after industry (steel, autos, and newspapers are just three examples) bled jobs either overseas or into the hungry maw of the tech empire?  You know, the one where advertising revenue is the only objective or value, and all content providers are valued at the rate of $0 per hour by Arianna Huffington and her prodigious ilk.   No, the labor movement just HAD to procrastinate until ridiculous cheesehead hats became the unfortunate pop culture accessory of the moment.  So much for human dignity…

After the MoveOn folks got the crowd fired up, I thought a spontaneous chorus of that Big Ten standard, “On Wisconsin,” was going to break out.  The football parallels just seemed palpable, what with the cheesehead hats and all.  Instead, the rally ended with the “Grannies for Peace” group singing: “This Land is Your Land.” 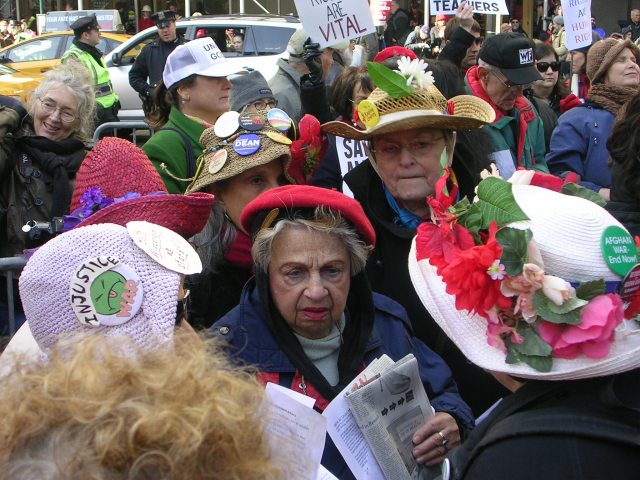 The Grannies were fun, but there is no equal to singing this anthem aboard the Hudson River Sloop Clearwater. Period.  Try it sometime and you’ll see what I mean.

The outcry at Foley Square attracted a more professional-looking crowd, in contrast to the American Dream rally, and it also managed to lure two more high-octane pols–New York City Council Speaker Christine Quinn and Senator Charles Schumer.  Plus, we learned that two Planned Parenthood staffers are married to two City Council members, so it was definitely more of an “in” crowd on Foley Square than at City Hall Park.

The speakers had a lot to talk about.  A complete demolition of women’s health programs is on the table in Congress as of this week.   Not just funds for abortions, the perennial political football, but funds for all medical care at Planned Parenthood clinics–including basic breast cancer screenings, pap smears, family planning counseling and testing/treatment for sexually transmitted diseases.  In my view, this is a really shocking attack on a particularly vulnerable population.

It was good to see a “person of the cloth” on the podium for at least one of the two events.  Senior Minister Donna Schaper of the progressive religious beacon of Greenwich Village, Judson Memorial Church, was invited to speak. Her church members were courageous pioneers, decades ago, in providing non-judgmental family planning advice to young women.  Rev. Schaper told the crowd (and I hope I get it right, since I’m paraphrasing) that there are political activists out there giving Christianity a bad name.   Then she delivered the zinger in her message–not all Christians want you to feel guilty about having sex!  On that encouraging note, I decided to head back to Rockaway.

You've entered the cyber-locale of Vivian Rattay Carter, a grant writer employed by Women's Housing and Economic Development Corporation in The South Bronx. I've lived and worked in the New York metro area since 1979, in diverse places like Astoria and Rockaway Beach (Queens), Kensington and Windsor Terrace (Brooklyn), Grand Street and Tribeca (Manhattan), and Norwood, Woodlawn, and Riverdale (The Bronx). I treasure the amazing parks, architecture, and cultural institutions of our multicultural city, as well as the musicians and music lovers who enjoy congregating here.
View all posts by rockviv →
This entry was posted in Business and Economics, Philosophy, Religion and Philanthropy, U.S. Government and tagged Congressman Anthony Weiner, leadership, NYC, politics, unions. Bookmark the permalink.