Sinners and Saints–Your Choice This Week!

In case you’re not a fan of beer drinking, here’s a novel way to celebrate St. Patrick’s Day—by reading a great book about the history of Ireland. “How The Irish Saved Civilization,” the first title in Thomas Cahill’s “Hinges of History” series, tells the dramatic story of the monks and scribes of Ireland who preserved the written treasures of the Western World when the barbarians started trashing the European continent after the fall of the Roman Empire.
The book is just a little over 200 pages, the typeface on the pages can be read without a magnifying glass, and it’s written in a breezy and engaging way.  It’s available at the Queens Public Library (and in online stores, as well, no doubt).  The great thing about choosing the library option is that you can stop to pick out a book, and on days like Friday, enjoy a free Irish music concert, as well!  Breezy Point resident Ed Deacy led the packed-house festivities at Seaside Library near Beach 116 Street on Friday.  Don’t get that from Amazon or Kindle, now do you? 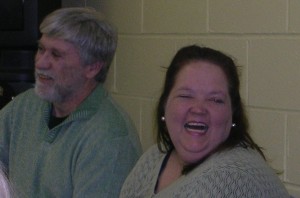 The Lilt of Irish Laughter at Deacy Show

Back to the book.  Though it was written over a decade ago, many of its insights seem quite apropos to events of the day.  In his concluding paragraphs, Cahill notes that more than a billion people in our world are now surviving on less than $370 a year.  He instructs us to look to the fall of Rome for clues to the inevitable result when a burgeoning impoverished population comes into conflict with a rich and ordered society like the Romans.

Cahill theorizes that the Romans ran things THEIR way and strived to accrue more resources because they instinctively believed that there would never be enough to go around.  He contrasts that civilization with the one established by universalists such as the Irish Catholics, who believe that all humans are equal children of God, and that we can all be saved by faith, hope and love.  Ultimately, Cahill concludes that “if our civilization is to be saved…it will not be by Romans but by saints.”  What an inspiring thought at this moment in history!

Continuing with the sinners and saints theme, the Gilleece Twins and Chris Benedict offered up their sometimes bawdy Irish song and joke-fest to an audience of about 90 at the Rockaway Theatre Company in Ft. Tilden on Sunday.  It was great fun for all.  Where else in the city does $16 get you a great show and a slice of gourmet soda bread, home-baked by a world-class pastry chef, Cynthia Peithman, who just happens to live in Rockaway and loves the RTC?

Congrats to Dalton’s Seaside Grill of Beach 108 Street and Rockaway Beach Boulevard,  featured in the Sunday, March 13, 2011 New York Daily News as the place to find the city’s “Best Poured Pint of Guinness.”  Of course, it’s relevant to note that regardless of which local Irish pub you choose, be it Connolly’s, Rogers, Blackwater, or any other, the pint will be poured properly in Rockaway.  If Moses had been Irish, that would have been one of the Ten Commandments—thou shalt not draw the beer too quickly, or without care…

Drawing a Pint at Connolly's in Rockaway Beach

And speaking of the fall of the Roman Empire, let’s ask the politicians and city agencies some serious questions about crumbling peninsula infrastructure this week.  As long as you’re not planning to ask Carl Kruger, the State Senator representing neighboring Mill Basin in Brooklyn.  According to recent news reports, Kruger has been securely in the pocket of Forest City Ratner, the developer of one of the Jamaica Bay marsh-paving projects proposed at Four Sparrow Marsh, near Toys R’ Us on Flatbush Avenue. Carl could go down, as he faces federal corruption charges, and another new State Senate slot will open in Brooklyn.   Let’s hope that marsh development project goes away, as well, which is not likely, since it’s listed as a priority development project in the new waterfront plan issued by Mayor Bloomberg on Monday, March 14, 2011.  Local residents and environmentalists plan to stop the development from proceeding. The battle is on!

Which brings us back to crumbling infrastructure. U.S. Congressman Anthony Weiner, mayoral candidate in waiting, is going for broke.  Proposing to tear down bike lanes, remove statues insulting to women, and maybe even fix some things in the west end of the Rockaways.  He seems to be the catalyst of a collaboration among various politicians, plus city and federal agencies, to repair the rapidly deteriorating section of the bay wall between Beach 131 and Beach 137 Streets. It seems that not much was moving forward until a good-sized hole in the roadway busted open about two weeks ago, near Beach 131 Street. The hole was recently filled with what appears to be gravel, in a temporary, stopgap measure. Traffic cones and a Jersey barrier were installed to prevent any further cave-in.  This weekend, some kind of crane (the yellow, metal kind) appeared in the water near the cave-in.

Rick Horan of My Rock Park (in hat) and Weiner

So come to a meeting at PS 114 on Tuesday, March 15 at 7:00 p.m., to see if a reasonable effort is being made to repair the wall in a more permanent fashion.  At a press conference two weeks ago near the cave-in, I asked Weiner to request that scuba divers take some underwater photos of the damage for residents to see, since the rest of us aren’t usually able to jump over the side of the bay wall to assess the situation.  He acknowledged the wisdom of this idea, but I doubt that he can get it done alone, since he seems to be better at playing hockey than scuba-diving.

Given those mesmerizing before and after photos of the Japanese coastline being published since Friday’s earthquake and tsunami, perhaps those of us who invested a quarter million or more in homes on the peninsula ought to start demanding these kind of detailed reports from the politicians and government agencies.  Ironic that Mayor Bloomberg’s long-heralded plan to spend billions on developing our waterfront is finally being issued today.  He couldn’t have worse timing!  Take a look at some of the waterfront parks (and roadways) in those Japanese towns that got completely wiped out in one day of nature’s fury.  Kinda’ changes the whole definition of “upland communities,” when a wave washes miles ashore, scraping away everything in its path.

If there’s a reasonable risk that things can be busted up or washed away by the uncontrollable forces of Mother Nature, perhaps it’s not prudent to build concrete structures at those locations in the first place.  But our politicians (particularly Bloomberg) seem like there’s never a concrete structure supported by a high-priced lobbying firm that they don’t love!  The ecologists fighting to stop the proposed extension of the runways at JFK Airport, imprudently located along the shore, couldn’t ask for a better marketing tool than the photos of the ruined airport near Sendai, Japan, with scores of planes and runways reduced to rubble.

An example of something else that shouldn’t have been built where it is along the shore is the Belt Parkway, clinging to its constantly eroding sandy underpinnings near Plumb Beach.  Did you see those photos of the railroad bridges supported by earthen substructures in Westchester and New Jersey that crumbled during the recent flooding?  If we are hit by a major Nor’Easter or minor hurricane in the near future, it looks like the Belt Parkway will share the predicament of the railroad bridges.  Better start allocating lots of money to build a man-made structural support for the roadway and the bike lane.

If you are out and about on Thursday, March 17, be careful how much you celebrate.  While you are at it, be sure to thank someone of Irish heritage for saving civilization.

All text and photos are copyrighted by Vivian R. Carter 2011, or used with permission of the source.