A House of Cards Faces Into the Winds of Jamaica Bay

Our elected officials are waiting.  They are watching.  I firmly believe they are looking to hear and see us at all of these meetings.  Some just don’t seem to care, but it behooves us to express our opinions to those who do.

The Jamaica Bay Task Force held a public forum at the Broad Channel American Legion Hall on Thursday, April 7 to educate residents about the Port Authority’s proposal to expand the runways at JFK Airport.  I counted about 180 people in attendance, and most remained to the conclusion, as the presentations were informative and interesting.  Kudos to Don Riepe of American Littoral Society and Dan Mundy, Sr., co-chairs of the group, and to the other presenters on the panel:  Dan Mundy, Jr. of Jamaica Bay Ecowatchers; Brad Sewell, Senior Attorney of the Natural Resources Defense Council; and Captain Vinnie Calabro, fishing columnist for The Wave.

The only federal elected official who appeared in person was Congressman Anthony Weiner, albeit briefly. He said he was headed for a flight to get back to Washington for the  negotiations to keep the government running.  I guess he gets an “A” for effort, under the circumstances.  City Councilman Eric Ulrich attended to oppose the plan.   State Senator Malcolm Smith only sent a representative.  Since Smith said at a recent town hall meeting in Rockaway Park that he hadn’t heard of any opposition to expanding JFK, I hoped he would have been there in person to find out more.  Hope springs eternal.

Fortunately, a very clear message was sent that people care deeply about this issue, even though most of the attendees seemed to be from three groups:  residents nearest the water and runways (Bayswater and Broad Channel), plus the boating, fishing and birding groups.  In my view, all of the residents and civic groups around Jamaica Bay need to pay more attention to this issue.

I wouldn’t even make an attempt to summarize the very thorough presentations here. Jamaica Bay Ecowatchers has posted some materials on their Word Press blog, and there will be a piece in The Wave this Friday.  You may also have heard a brief interview with Geoffrey Croft of NYC Park Advocates discussing the meeting, which was broadcast on National Public Radio on Friday.

The key takeaway point did not surprise me–there’s a lot of money being spent to manipulate a lot of information at the behest of businesses interested in making a buck (or two, or a billion) out of the airport.  Attendees at the big expensive conference in January to plot the future expansion of JFK were presented with reports that masqueraded as well-documented “facts” with fancy statistical tables.  But faced with Dan Mundy, Jr.’s thorough power point presentation rebutting it, and the great series of fishing photos presented with very dry and humorous narration by Captain Vinnie Calabro, the report by the Regional Plan Association (done at the request of the Port Authority of NY & NJ)  just couldn’t stand up to scrutiny. 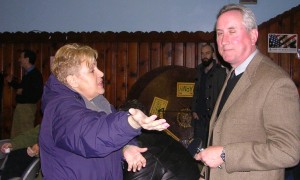 Port Authority Representative Gets an Earful from Ida Sanoff, one of the Task Force's Dogged Advocates for the Bay

Which reminds me of another story…about another grab of property which, like Jamaica Bay, was meant to be held in trust for future generations–the Civil War-era Tobacco Warehouse near Brooklyn Bridge Park.  On Friday, the Bloomberg administration and our friends who run Riis Park and Ft. Tilden (the U.S. Department of the Interior) were enjoined from proceeding with a plan to demap the warehouse and another similar historic building from Brooklyn Bridge Park at the behest of a developer.  Since that case is relevant to many issues of public concern here on the peninsula of late, I think it’s apropos to quote the press release issued by the landmarks conservancy about the court decision:

“The house of cards erected by the defense cannot withstand the gentlest breeze,” [the Judge] wrote.  Addressing the claim that the structures were included on the federal map “by mistake,” the Judge labeled it as “revisionist,” and flatly rejected it, saying, “there is . . . not a shred of evidence [to suggest a mistake].” The Court criticized [the National Park Service’s] decision to rely on information from the City and State agencies “without confirming or even investigating them or requesting any additional information or public comment.”  The Court also rejected the defendants’ assertion that the Tobacco Warehouse was “unsuitable” for outdoor public recreation.  The Court found the assertion was based on an “invisible record,” and accused the [National Park Service] of using “cherry-picked” information to support it.
In my view, we are very fortunate to have some capable advocates
working on the side of the residents who live near the bay.  The Jamaica Bay Task Force turned the “Big Ass Fan” on the JFK expansion plan…and the deck went flying!
All text and photos are copyrighted by Vivian R. Carter 2011, or used with permission of the source.