My Short-Lived Run for Office

It lasted for a mere 20 days in July.  For less than three weeks, it was a chance to upset the apple cart, to offer a fresh new choice to voters in Southeast Queens.  Even a chance to make a point about the importance of accurate local news reporting.  When it ended, the only upturned apple cart was my own. Don’t let the rule book hit you on the way out!

Events were set in motion by Governor Andrew Cuomo’s pre-Independence Day declaration of a Special Election to fill the vacant New York State Assembly position in District 23, formerly held by Audrey Pheffer.  Alarmed by what I see as the increasing corporatist tilt of both major political parties, and the news media’s apparent complicity in maintaining the status quo, I had switched my allegiance to the Green Party during summer 2010.  You know—the Greens are Ralph Nader’s people, labeled by corporatists as “tree huggers” or “peaceniks.”  I happen to love trees and peace on Earth, but many in our society are afraid to declare their love of these things unless it’s Christmas-time and the words can help jingle the cash registers at Macy’s.  It seems hard to think of more divisive topics than global warming and war, unless you start talking about unions and bike lanes.  In trying to restore grass-roots democracy and build a united constituency for change in America, the Greens have their work cut out for them! 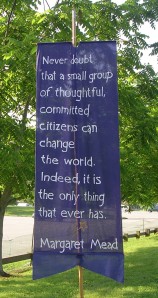 A Favorite Quotation Banner from the Clearwater Festival

My impression is that the Green Party is populated with thoughtful, idealistic, independent thinkers who are not put off by confronting the most difficult issues that divide us, and that is why I joined up.  The party’s attempt to address the complexities of achieving peace in the Middle East sets them at odds with both Anthony Weiner and Former Mayor Ed Koch.  Koch, as you may have heard, recently endorsed Republican businessman Bob Turner to replace Weiner, encouraging voters in the 9th Congressional District to use their all-important franchise to send a message opposing President Obama’s Middle East policy.  Sorry, Ed, but you are pretty much out of touch.  The Middle East is important, but I’d hazard a guess that it’s not number one on most voters’ minds these days.  Domestic issues like paying the rent, avoiding foreclosure, finding a job and a cheap gallon of gas take up much more of our attention these days.

Back to summer, 2010, when I helped carry petitions around Brooklyn and Queens for the Green Party’s slate of candidates.  In the fall election, I joined almost 60,000 New Yorkers who voted for the Green gubernatorial candidate, Howie Hawkins, a decidedly non-corporate type. This outcome guaranteed the party an official ballot line in any upcoming elections. Shh!  Keep it a secret, and don’t tell the local newspapers.  News of ground-breaking changes sometimes just never filters down to the people who need to know.

When Pheffer vacated her position in May, 2011, that meant the Green Party had an opportunity to run a candidate for the seat. Four news articles in The Wave, on April 29, May 6, May 27 and June 3 (three of these appeared on the front page), specifically and incorrectly stated that only five parties had ballot status in New York elections, followed by the all-important editorial of July 8, which repeated the error by failing to include the Green Party as the sixth ballot status party.  I decided to take positive action to address my frustrations.

I completed a voluminous candidate questionnaire stating why I was qualified to represent the 23rd District in the Assembly, and submitted it to the Executive Committee of the Green Party at the end of May.  Given the timing, the 10-page package could have been subtitled: “Why I Want to Run for the Assembly on My Summer Vacation.”

On Wednesday, July 6, the Green Party Nominating Committee met and selected me to run for the position.  A new 10-page package of paperwork winged its way to the Board of Elections in the City of New York, and was received and date-stamped, on time, by July 11.

The whole thing ended two weeks later, on July 26, when I received a simple, one-page form letter from the Board of Elections, which said:

“Dear Candidate Vivian R. Carter:  At the hearings on nominations held 7/26/2011, please be advised that the following will not appear on the ballot for the Special. Assembly 23…09/13/2011 since the certificate did not comply with the New York State Election Law and/or the Rules of the Board of Elections.”

Putting grammar and syntax aside, I got the message.  My candidacy was dead. Fatally flawed.  In terms familiar only to lawyers and Latin scholars, the Board of Elections had found a “Prima Facie defect…not subject to a cure.”

I won’t bore you with all the details, an arcane thing having to do with addresses on the forms that didn’t match.  Suffice it to say that many others have been tripped up on this point before.  Any candidate (particularly one with a primary and secondary address) needs to become quite familiar with these rules, plus many others, before attempting a run for office.

The Annual Statements of Financial Disclosure required by the New York State Legislative Ethics Commission specifically speak about an individual’s “primary or secondary personal residence,” and we all know that virtually all U.S.office-holders need to maintain two living spaces, one where the constituents reside and another where the legislative body sits while in session. Box 7 on New York’s recently-revised voter registration form asks for “the address where you live,” and Box 8 permits you to fill in “the address where you receive mail.”  Post office boxes are allowed for the latter, but not the former.  You can’t sleep in a post office box.  If this recession sticks around a while longer, someone may try.  After all, it only costs about $100 a year!

A voter can choose where he or she wants to register to vote, and one court case upheld a person’s choice to vote at a residence where he had slept only once in 7 years.  If you have a summer home, you may choose to register to vote there.  Same if you are a college student.  You can register to vote using your dormitory room address, as I did back in 1976 so I could vote for Abner Mikva, former U.S. Congressman from Illinois, who later went on to the D.C. Circuit Court of Appeals and served as White House Counsel for President Bill Clinton.

You can maintain any number of residences, but must choose only one for voting purposes. Then, if you decide to run for office, that’s the address that must go on ALL the papers.  Make sure you get it right.

The biggest thrill of my short-lived run for office:  seeing my name transliterated into Chinese characters, while being offered the heady choice of whether to select a different version of how it should appear on the ballot.  Although my 15-year-old daughter had just completed a nine-month study of the Chinese language, she dismissed my request to review it, chiding me that “it takes years to learn how to write Chinese characters!”

Almost Made it Onto the Ballot!

The low point:  receiving a large, official-looking Kraft envelope in the mail, containing a letter from the Legislative Ethics Commission advising me that I had until August 2 to file a quite substantial financial disclosure form, or I could be subject to civil or criminal penalties.  It seemed to have been postmarked the same day the Board of Elections had sent me the form declaring my candidacy deader than a doornail.

I felt like I had just stepped through the looking glass and into Wonderland.

You've entered the cyber-locale of Vivian Rattay Carter, a grant writer employed by Women's Housing and Economic Development Corporation in The South Bronx. I've lived and worked in the New York metro area since 1979, in diverse places like Astoria and Rockaway Beach (Queens), Kensington and Windsor Terrace (Brooklyn), Grand Street and Tribeca (Manhattan), and Norwood, Woodlawn, and Riverdale (The Bronx). I treasure the amazing parks, architecture, and cultural institutions of our multicultural city, as well as the musicians and music lovers who enjoy congregating here.
View all posts by rockviv →
This entry was posted in New York State Government and tagged Bob Turner, Congressman Anthony Weiner, Former Mayor Ed Koch, Green Party, leadership, politics, Rockaway. Bookmark the permalink.