A Paean to Irene

That Hurricane Irene was some bi-polar storm! Carefree teens tubing down the Saw Mill River Parkway on Sunday afternoon contrasted with kayakers in distress pulled from the Hudson River on Saturday night.  The mood of the city swung like a pendulum, from the panicked evacuation mode on Friday and Saturday to the almost gleeful abandon of Sunday afternoon. 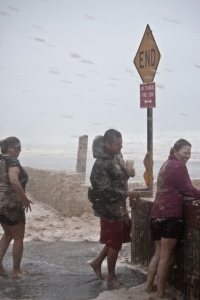 By 2 p.m. on Sunday, strolling sightseers frolicked on the beaches and boardwalks of Long Beach and Rockaway Park, not far from where the storm’s weakened eye had passed just six hours before. Jetskiiers, canoeists and rafters chugged along Norton Drive in Bayswater.

Frolicking in the Mess Left by Irene at the Skatepark

One child and his caretaker even ventured into the mess left at the Rockaway Beach skatepark, as if it were a playground.  At least he didn’t have to share it with skateboarders, who as a group seemed a bit more prudent than the cyclists, a few of whom could be seen on news cameras, still riding nonchalantly around the streets of Manhattan on Saturday evening as the rain bands of the storm began to approach.

How many Rockawayites evacuated?  No one can say for sure.  I would estimate, based on a spot survey of the ten to twelve households I have closest contact with, that the evacuation rate for residents was about 50%.  There’s no doubt that plenty of people stayed behind.  Many probably believed the rosy predictions (I chuckled when I heard them called “Chamber of Commerce weather reports”) that the winds would top out at 40 mph, with a storm surge of no more than 2 feet. What is most important is that the exodus that DID occur was orderly and efficient.

I chose to remove to the home of friends in Westfield, New Jersey, which seemed logical, given its distance from the shore. When I left shortly after rush hour on Friday, I expected the worst.  Instead, I arrived at Westfield in just about an hour and 15 minutes, all tolls were waived due to the emergency (woo-hoo!), and I hardly had to tap my brakes as I proceeded across Staten Island and into Union County.  Even if some are carping that the evacuation effort was overblown and expensive, both of which are probably true, you have to admit that it was great practice.  The kind of practice that may come in handy some day, if a bigger disaster strikes.

Guess Which Business Was Among the First to Re-Open on Sunday...Hanging Pots and All!

It’s hard to estimate how many tourists came for the show.  People are pretty crazy these days.

When I returned to the Rock, I heard of a hurricane party or two that had taken place.

Ironically, the oceanfront was not the problem for much of New Jersey, where I was camped out.  It was the rain, stupid!  The next town over, Cranford, turned into a lake.  So did many of the parking lots, basketball courts, and roads.  Virtually everyone in that part of New Jersey ended up losing power by the middle of the night on Saturday, and some of the main arteries in the county were blocked by fallen trees or huge ponds of storm water by the morning.

After the television went bye-bye at the home where I was staying, I spent the night listening to storm reports on a crank-powered radio, to drown out the sound of the wind and the huge trees swaying outside.  It was a godsend that the CBS affiliate station in NYC was broadcasting on one of ESPN’s AM frequencies.  I also enjoyed listening to the coverage on 101.9 FM, which bills itself as “New York’s First 24-Hour All-News FM Radio Station.” 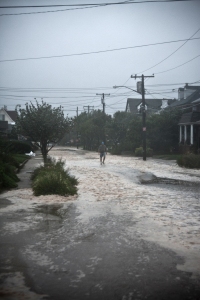 By high tide at 8 a.m. on Sunday, I called my children (who had stayed on the Rock with their Dad), to hear about what they were observing.

Sandbags Break the Symmetry of Windows, Doors and Railings

I learned that most of the west end of Rockaway never lost power, even though there were reports of water splashing waist-high on Newport Avenue near Beach 129 Street at high tide on Sunday, and a few blocks that have recurring localized problems with their transformers did lose their electricity.

So, after the storm’s eye had passed to the north, at about noon on Sunday, I decided to re-evacuate from New Jersey back to the Rock. Lots of detours around flooded streets were required, but I made it back in about two hours.  I then joined legions of others (both locals and visitors) for a “photo tour” of the west end of the peninsula.

I saw that there were plenty of tree limbs on the streets (three large ones on my block seemed to be on the high side of the average). The plane trees and those new Atlantic cedars on the Rockaway Beach Boulevard malls in the west end endured the best of the tall vegetation; there are always problems with the pear trees, for some reason.

The Roxbury Parking Lake. Great if You're Parking a Boat!

Sections of the boardwalk supports (and even a few of the benches and railings) were lost in the 90’s and near Beach 102 Street.  The skatepark was filled with mud and other debris.  All in all, the west end of the peninsula survived in pretty good shape.   But you have to admit it–Hurricane Irene was some wake-up call!

You've entered the cyber-locale of Vivian Rattay Carter, a grant writer employed by Women's Housing and Economic Development Corporation in The South Bronx. I've lived and worked in the New York metro area since 1979, in diverse places like Astoria and Rockaway Beach (Queens), Kensington and Windsor Terrace (Brooklyn), Grand Street and Tribeca (Manhattan), and Norwood, Woodlawn, and Riverdale (The Bronx). I treasure the amazing parks, architecture, and cultural institutions of our multicultural city, as well as the musicians and music lovers who enjoy congregating here.
View all posts by rockviv →
This entry was posted in The Built World, The Land We Share, Water and waterways and tagged Hurricane Irene, local news, NYC, Rockaway, weather events. Bookmark the permalink.