Tourists in Our Own Town 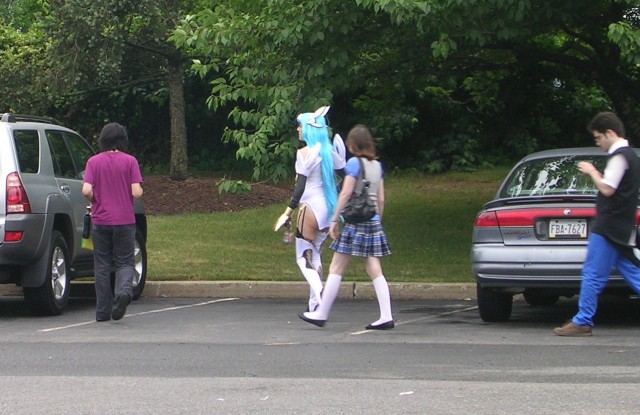 That's supposed to be a Japanese schoolgirl--not a Stella Maris 11th Grader! 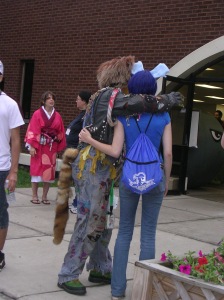 At first, it looks like two ordinary teen-agers--then you notice the ears and tail!

You’re almost at your destination when you see the first person walking down the block sporting a long, furry tail.  You are within walking distance of a ‘comic-con,’ those wildly popular, so-called ‘geek conventions’ dedicated to comics, graphic novels, anime, manga, video games, toys, movies and television. New York City hosts more than a few each year.  This weekend, from October 14-16, 2011, it’s the New York Comic Con at the Jacob Javits Convention Center.  Not to be confused with the Big Apple Comic-Con, or the long-running, non-profit, San Diego Comic-Con.  Other recurring metro-area venues include Stevens Institute of Technology in Hoboken, New Jersey, and the New Jersey Convention Center, out in the distant suburbs, where the photos featured in this piece were taken, this past spring.

Maybe Mom or Dad was in the cast of "Cats" on Broadway!

The point is to celebrate a peculiarly American form of entertainment—the world of comics and animation.  For those who love dressing up in disguises (‘cos play’ is the new term for this in the anime world) it’s sort of like enjoying Halloween several times a year.  I heard on the radio that 100,000 are attending the NYC event, which runs for three days. That’s the capacity of the Javits Center!  I can only imagine what it sounds like in that place during the comic-con.

I’m the parent of two avid comic-con fans, one of whom is a budding entrepreneur with sufficient artistic talent to have paid her admission by doing sketch commissions on at least one occasion. The total family financial contribution toward the cause over the past three years is a figure shrouded in mystery.  There are lots of saved and advanced allowances being squirreled away for these much-anticipated outings.  We haven’t tried to calculate the overall cost of transportation or time and effort involved in the preparations.  Two times, we financed travel to events in other cities.  OK, so paying for a Mega Bus fare is not exactly stimulating the economy–much.

The Fez is a recurring prop in cartoons--and a 'must have' for the Dr. Who fan in my house!

I have been told that admission is about $50 for one day, and I’ve also heard that the chicken nuggets inside the hall go for $8.  So my teens and their friends try to be frugal, which translates into spending all their money on those unusual, quirky, must-have posters, magazines, movies, video games or costume items, and skipping the food and drink.  They run all day on adrenaline, and leave 8-10 hours later, ravenously hungry and thirsty. I remember having the same kind of schedule when I was a teacher in the New York City schools several years ago.

As a parent, I haven’t opposed participation, since the comic-con encourages creativity, fun, and entrepreneurial spirit.  However, like most risky ventures, there can be a big cost.  My daughter has a stack of some bookmarks she tried to sell without success (the print shop bill for color copies came to over $100, and I think she made about $20 of it back).  There are mysterious bags of clothing and props in her closet (and since it’s a big closet, I think she’s been storing some items for friends, as well).  I’m going to start charging, or force her and her friends to rent a Pod!

Memories of Pokemon are vivid--perhaps too vivid for some parents!

It’s sort of comforting to me that this weekend’s event is being run by Reed Elsevier Group, PLC, which calls itself “the world’s leading publisher and information provider.”  Back at the turn of the 1990’s, when I worked as a publishing lawyer at Times Mirror, Reed Elsevier was our major competition in the genre of trade magazines.  Their titles range widely, from Variety to New Scientist, Farmers’ Weekly and Poultry World.  I know from personal experience that their in-house lawyers toiled long and hard to be sure the event is safe and fully insured.  But transportation to and from the venue is another story, hence the title of this piece—Tourists in Our Own Town.

So you live in the outer boroughs and you decide that three 16-year olds shouldn’t be taking the A-train all the way in and out of Manhattan at dawn or in darkness, given the interminable weekend service disruptions that are a part of life in the Rockaways.  What are the alternatives?  Encourage them to start their own local event?  I tried that. It does seem ridiculously unlikely to succeed.  Try the Queens version, which just got off the ground in Astoria this year?  Also not likely.  The photo of the ‘cos play’ that appeared in the Queens Chronicle looked like a group of six-year olds trick-or-treating in Superman outfits purchased at Party City.

So, I planned to get the crowd up early in the morning in exchange for a free ride.  How hard could driving be?  I was about to find out.

You'd need all the nail parlors in Rockaway, working full tilt, to take care of this set!

It wasn’t that tough getting in by car from Rockaway.  An hour’s trip if you spring for the Battery Tunnel. But getting out of Manhattan was no picnic, what with the ongoing ‘Occupy Wall Street’ efforts backing things up.  So, I decided I’d avoid the trouble on the evening’s return trip. 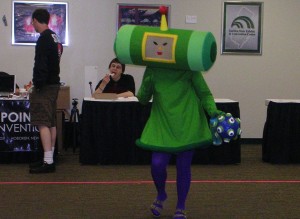 Don't know what this green thingie is!

When my daughter called me at about 7 p.m., I urged them to take the E train to Forest Hills, where I would pick them up.  Well, it was a little stronger than “urged.”  In the first of a string of text messages, I conveyed what I had just heard on the radio traffic report—don’t even think of driving to Midtown!  Through the wonders of a ‘Notify NYC’ message sent to my cell phone shortly after I left the house, I learned that “due to law enforcement activity in the vicinity of Times Square, southbound 7th Avenue between West 57th and West 46th streets is closed. Expect traffic delays and changing traffic patterns in the area.”   Satisfied that my instincts not to drive into Manhattan had been confirmed, I continued along Woodhaven Boulevard, planning that I would enjoy this outing to an area where it’s still possible to park your car and walk around for pleasant window-shopping on a cool fall evening.  And it’s only about a half-hour’s drive from the Rock.

I had found out late in the afternoon that ‘Occupy Wall Street’ was on the move to Times Square, but I was not aware that THERE WAS NO E TRAIN SERVICE from the Javits Center, due to construction.  What were they thinking?  The stock phrase “use mass transit to avoid delays” was about to be turned on its head.

Because of the chaos of re-routed trains, my dear daughter and her friends ended up almost visiting the Bronx while I paced the sidewalks of Forest Hills in anticipation of their arrival.  I think my kid will do well on the writing portion of the SAT, because her text missive at 9:03 p.m. was quite clear and succinct—“We had some trouble with the E.  We’re still in Manhattan. The E line wasn’t running and we have to transfer several times to actually get to it.”  There was no desperation, but the look on their faces at 10:15 p.m., when they finally came climbing up out of the hole in front of the Chase Bank branch in Forest Hills, said it all.  Their vagabond shoes were no longer longing to stray.  They wanted to share some nice comfort food and head home.  So we stopped into a local chain eatery, where they shared two chicken pot pies and creamed spinach, plus a long drink of cold water with their food. 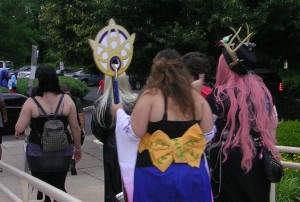 Time to go--put the pink hair away for another couple of months!

In the five-and-a-half hours of travel to get to and from this splendid event, we could have driven to Philadelphia, Atlantic City, or Albany.

If we can make it here, we’re gonna’ make it anywhere…

You've entered the cyber-locale of Vivian Rattay Carter, a grant writer employed by Women's Housing and Economic Development Corporation in The South Bronx. I've lived and worked in the New York metro area since 1979, in diverse places like Astoria and Rockaway Beach (Queens), Kensington and Windsor Terrace (Brooklyn), Grand Street and Tribeca (Manhattan), and Norwood, Woodlawn, and Riverdale (The Bronx). I treasure the amazing parks, architecture, and cultural institutions of our multicultural city, as well as the musicians and music lovers who enjoy congregating here.
View all posts by rockviv →
This entry was posted in Business and Economics, Meet Your Fellow Man, The Arts and Entertainment, The World of Human Beings and tagged Comic-Con, media, NYC, Rockaway, transportation. Bookmark the permalink.