We Demanded the Sand–but THIS is Ridiculous! 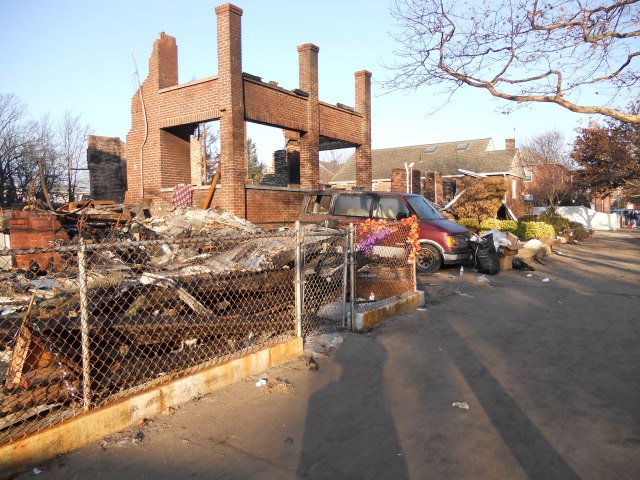 What’s Left of the Vivino Residence on Beach 129 Street

Rock Viv is back! 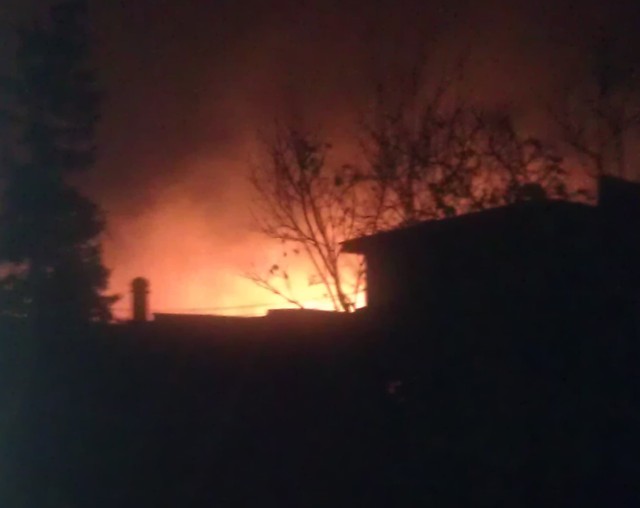 I survived Hurricane Sandy, which struck the Northeast coast of the United States at about 9 p.m. on Monday, October 29.  I sent a panicked text message to a friend a few minutes later that said:  “the entire basement and first floor is flooded, and the house is shaking.  My car is filled with water up to dashboard.  The whole 400 block here has water half way up first floors!”  That panic was nothing compared to how I felt a few hours later as I watched the embers of the Harbor Light Restaurant fire blowing hard to the north, landing on the Maroneys’ house, just across the back yard.  I only managed to sleep once I was assured that Bulloch’s gas station was not going to blow up, as tanks are always sealed off from such catastrophes, these days.  The risk of fire was something the OEM brochure on hurricanes didn’t mention. Something few of us had thought of. 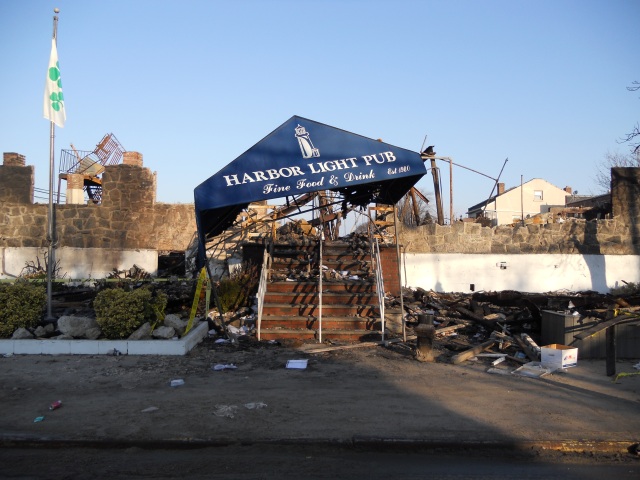 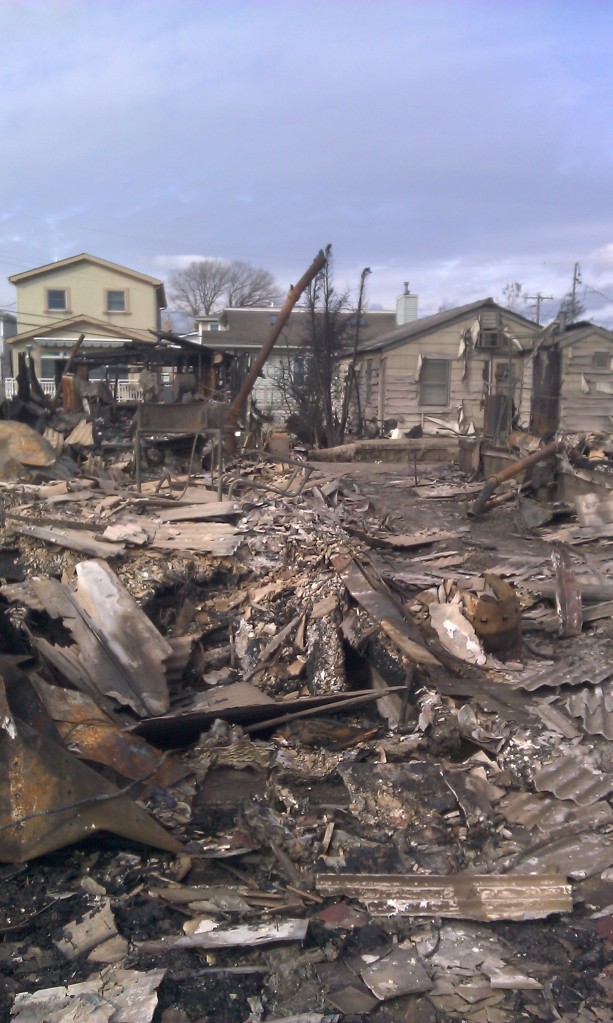 My second floor apartment stayed dry, but not warm. I toughed it out without heat or lights for almost 10 days on the Rock, with flashlights and pots of steaming water on the stove.  Then, the Nor’easter blew in on Wednesday, November 7.  At that point, I knew that my attempt to stay was futile. 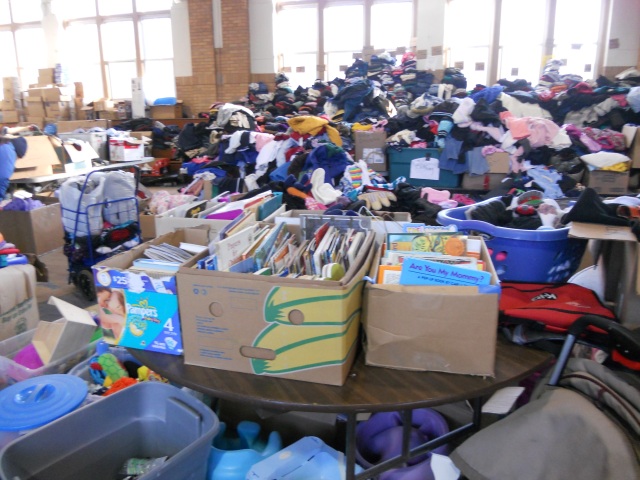 There are so many people and groups to thank; it is overwhelming to even try.  Number one was the Catholic Charities organization, which arrived at St. Francis de Sales Church with canned goods and warm clothing on Day 2, followed by days and days of increased support and sustenance of various kinds. 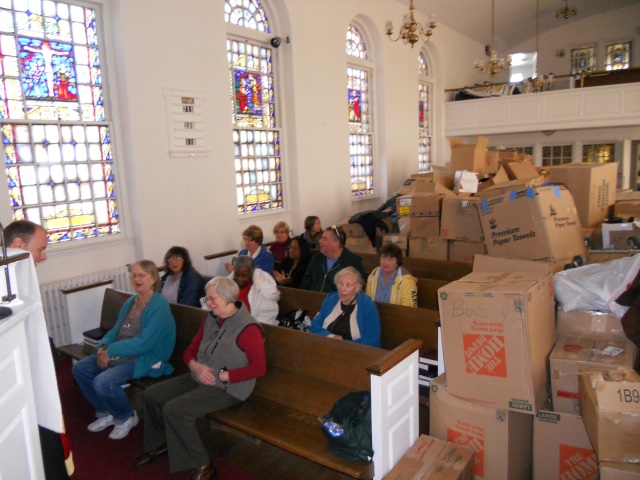 The mission of First Congregational Church did not cease as a result of the storm. The historic sanctuary doubled as storage for donated clothing while worship services continued. AA meetings resumed on Day 3, despite heavy storm damage to the chapel floor, Sunday School and basement choir room.

Thanks to the many friends who offered me shelter, showers and rides, like the guys from the First Congregational Church AA meeting who rescued me from the sleet and cold, and drove me to the parsonage of the Ridgewood Presbyterian Church.  There, Pastors Vicki Moss and John Harris welcomed me into their lovely, fireplace-cheered “Mermaid Room,” which was a peaceful respite for a night. Also, I owe much gratitude to Jason and Joy Marr of Hip to Hip Shakespeare Company, who followed by offering me a week in their apartment in Woodside (with a well-appointed laundry room, which was a lifesaver).  Perhaps most memorable was the first opportunity to take a warm shower on Day 8, courtesy of The Hartigans. How did some people figure out how to get their boilers and heat running so early?  I guess you could say that luck favors the prepared, and the generator-owners… 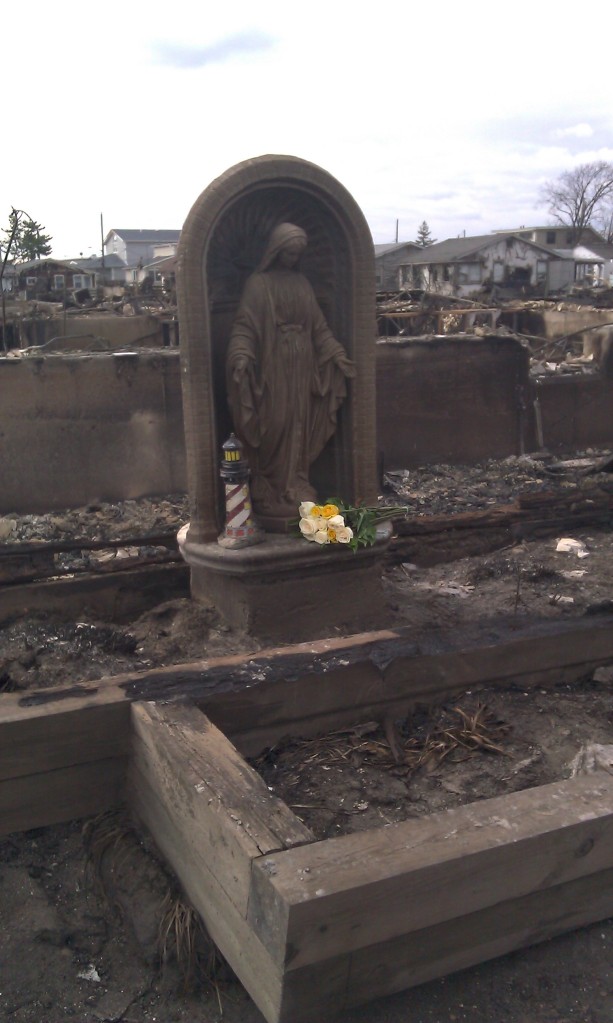 The now famous Breezy Point Madonna was featured in New York Times this week. I snapped this photo on Day 3.

So many friends emailed or called to check in and express their concern–be assured that since communications were practically non-existent to those on the Rock during the first week, I would have responded sooner if I could have.  I was dying to post to this blog since the day after the storm.  I was so anxious about it, that I ended up misplacing my camera card with photos taken on Days 2 and 3, when I walked all the way from the Breezy Tip to Beach 94 Street to document nature’s mutilation of our community.  I regret that due to lack of transportation and sheer exhaustion, I couldn’t get further east on the peninsula to view all of the damage.   Now that Day 18 is here, I am finally organized and ready to tell my own story.  Yet, I feel so numb that I can barely write. 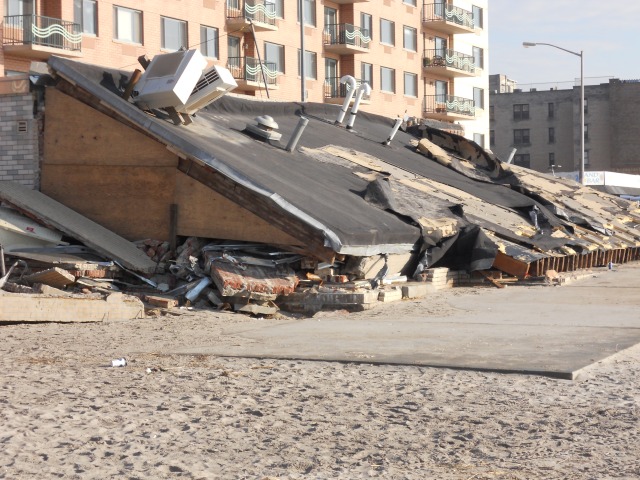 The view from the balconies of The Ocean Grande is significantly less grand, with this to look at!

I knew it was really bad when there was no Wave newspaper on Friday, November 2, or November 9.  The paper was founded in 1893, and I don’t think there had ever been a cessation of publication before this storm.  The first floor newsroom (with original bound copies of the paper from the 1890’s and on) was destroyed.  Much of the archives of the Rockaway Museum and Playland memorabilia–gone.  Another truly shocking vision was the sight of Dean Georges’ beachfront home, which held a huge collection of Rockaway memorabilia, flattened to the sand.  I hope the statue from Curley’s Hotel survived, Dean! 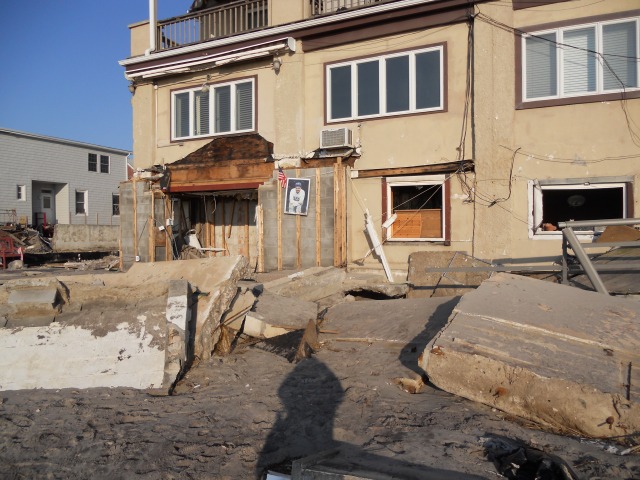 Award for best promotion and marketing as a result of the storm goes to Kenny Vance of the Planotones (and earlier, Jay and the Americans). When his beachfront home hit the sand, his entire collection of CDS, 45 rpm records, posters, and memorabilia dating back to the 1950s, was strewn about the lawns, sidewalks and streets of the west end, much of it landing several blocks from the house! 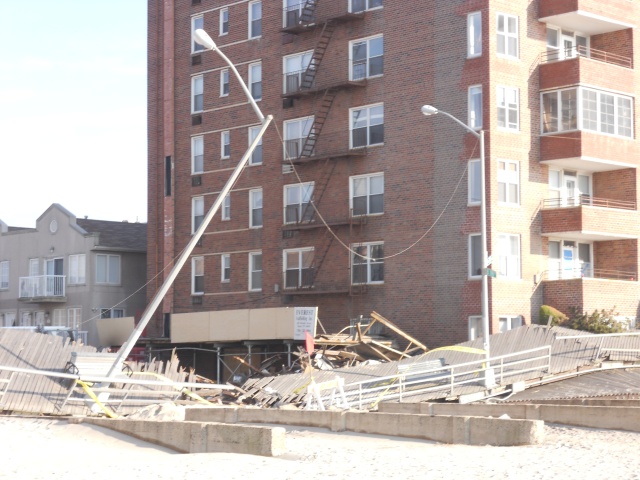 But ask anybody about the true punch to the gut, and most will answer that it was the sight of the entire Rockaway boardwalk lifted from its concrete supports and tossed like Tinker Toys against apartment buildings and homes.  In fact, I hadn’t cried at all until Day 5,  when my Grundig world band radio, tuned to the Bon Jovi-Springsteen fund-raising concert, picked up the first strains of the group of performers singing “Under the Boardwalk.”  I sobbed for 5 minutes straight! 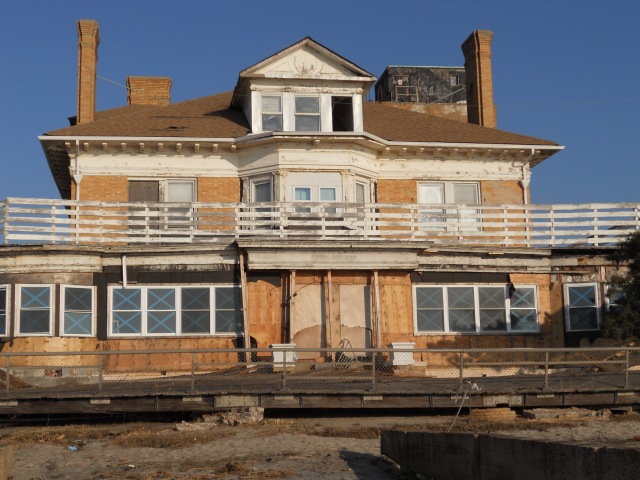 One of the oldest buildings on the Rockaway Park beachfront took wear and tear, but survived. The Chai Home was a beachfront hotel during the peninsula’s heyday, but later became a social welfare facility.

But perhaps most disturbing of all, when I heard that the bridges supporting the shuttle train tracks to Rockaway Park had been completely wrecked, I got a chill.  It took 6 years to get the bridge rebuilt and train service restored, after the trestle fire of May, 1950.  Let’s not even think about it… 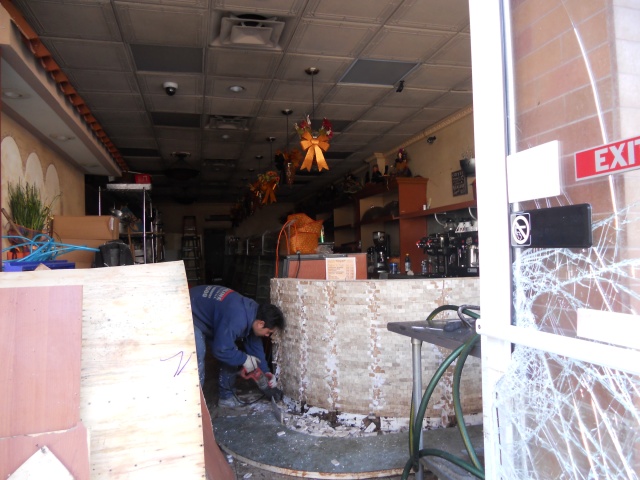 You need a caption for this one because you wouldn’t recognize it–what’s left of Ciro’s Pastry Shop on Beach 129 Street.

My truly unique perspective on all of this is not the loss of a car, or two broken windows in my home, or six neighbors who died as a result of the storm.  I devoted almost four years, from 2008 to 2011, to providing advertising support for the operators of the businesses of the west end of the peninsula.  I counted almost all of them as close personal friends. I helped from the first days with the launch of Rockaway Seafood Restaurant, Surfside Bagels, Thai Rock, and other successful start-ups.  Almost every one of them was wiped out for the time being. 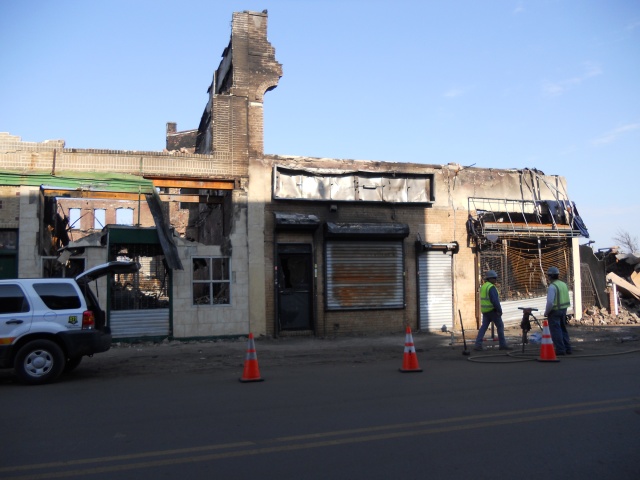 All five of the retail stores selling my book, Images of America: Rockaway Beach, sustained major damage, as well.  What an unspeakable loss.

The first to reopen, on Day 17, was Frankie Giambra’s barbershop on Beach 129 Street. Several other businesses on the east side of the street seem like they will be following, soon.  Hope of a recovery is there. 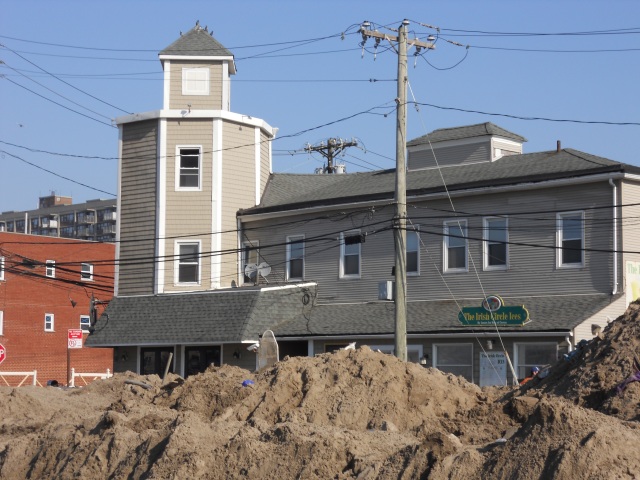 The Irish Circle, oldest building in Rockaway Beach, has survived the 1938 Long Island Express, Hurricanes Donna and Irene, and now–Sandy!

Let’s look on the bright side. We demanded the sand.  We sure got it. 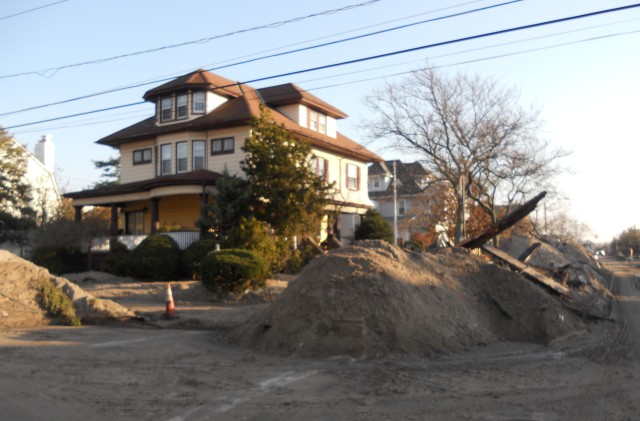 You've entered the cyber-locale of Vivian Rattay Carter, a grant writer employed by Women's Housing and Economic Development Corporation in The South Bronx. I've lived and worked in the New York metro area since 1979, in diverse places like Astoria and Rockaway Beach (Queens), Kensington and Windsor Terrace (Brooklyn), Grand Street and Tribeca (Manhattan), and Norwood, Woodlawn, and Riverdale (The Bronx). I treasure the amazing parks, architecture, and cultural institutions of our multicultural city, as well as the musicians and music lovers who enjoy congregating here.
View all posts by rockviv →
This entry was posted in Planet Earth, The Land We Share, Water and waterways and tagged Breezy Point madonna, community, Hurricane Sandy, local news, newspapers, Rockaway, street flooding, transportation, weather events. Bookmark the permalink.

4 Responses to We Demanded the Sand–but THIS is Ridiculous!