A Ferry Nice World, Long Ago

I often try to imagine a world without cars, and vintage maps are helpful.  This week, I am gazing at two examples–(1) the Beers 1886 map of Central Rockaway Beach, New York and (2) a sepia drawing of Staten Island as it appeared from 1775-1783.  Both maps predate the invention of motor vehicles, and depict two neighborhoods surrounded by water, with nary a bridge in sight. 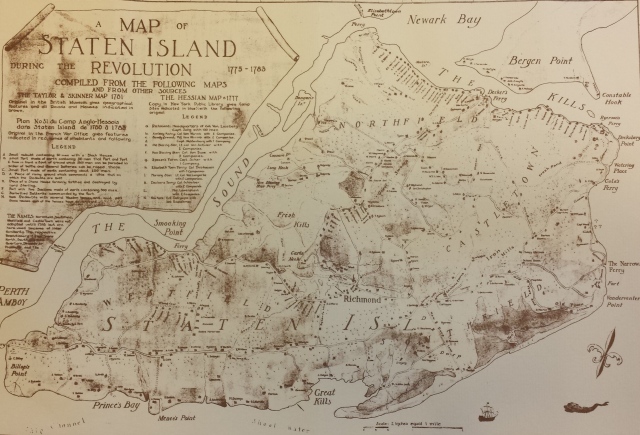 The largely agrarian land mass of Staten Island (about 60 square miles in area), was criss-crossed with miles of wagon roads, terminating at seven ferry landings.  Four of these would ultimately become toll bridges (the Verrazano-Narrows, Goethals, Outerbridge Crossing, and Bayonne), and one of the others continues to the present day as the island’s St. George terminal for free 24-hour ferry service to Manhattan.

Back to Rockaway Beach.  During tourism’s heyday, this small section of the peninsula, less than 20 blocks long in the 1880s, hosted five boat landing sites with regular service–the famed Iron Pier, where large oceangoing vessels could dock at Beach 105th Street, plus bayside landings at Hammels, Holland, Seaside, and Beach 108th Street’s Neptune House. While Staten Island had vast agricultural acreage (even well into the 20th century), the spine of the narrow, 11-mile long Rockaway Peninsula was one busy thoroughfare for wagons (called “Central Boulevard” in the early days), traversed by wooden pedestrian walkways, sand paths or dirt streets, depending on the location.  At one time, train lines also ran parallel to the Boulevard, along the beach and the bay.  So there were lots of transportation options for visitors and residents, even before the advent of trolleys, cars and buses. 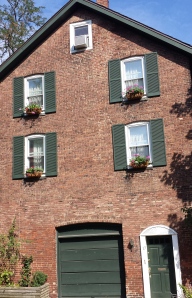 To this day, stately historic buildings grace the North shore of Staten Island.

Staten Island’s farming and fishing businesses were later supplemented with several large factories during the 1900s, while Rockaway continued to thrive on tourism well into the 1950’s. Vast changes occurred in both places with the arrival of Robert Moses’ roads, bridges, parks, and housing developments.  Both communities eventually attempted to secede from the City of New York, although not at the same time.  That’s a bigger story for another day.  On this muggy day in September, as New York City seems ready to terminate regular ferry service to the Rockaway peninsula next month, I’m merely waxing nostalgic on the “ferry” nice world we have lost.

You've entered the cyber-locale of Vivian Rattay Carter, a grant writer employed by Women's Housing and Economic Development Corporation in The South Bronx. I've lived and worked in the New York metro area since 1979, in diverse places like Astoria and Rockaway Beach (Queens), Kensington and Windsor Terrace (Brooklyn), Grand Street and Tribeca (Manhattan), and Norwood, Woodlawn, and Riverdale (The Bronx). I treasure the amazing parks, architecture, and cultural institutions of our multicultural city, as well as the musicians and music lovers who enjoy congregating here.
View all posts by rockviv →
This entry was posted in Business and Economics, Jamaica Bay, New York City Government, The Built World, Water and waterways and tagged Jamaica Bay, Rockaway, Rockaway Ferry, Rockaway History, transportation. Bookmark the permalink.