It’s our favorite game on the Rock.  Not rugby or soccer or hoops.  In Rockaway, it’s the fifty-fifty.  Get out your $5 bills.  No civic meeting, concert or sporting event is complete unless everyone’s toting around those big strips of tix.

The place was the Belle Harbor Yacht Club, on the evening of Thursday, October 14.  Although a Nor’easter was blowing outside, the meeting room was almost filled, thanks to the organizers from My Rock Park’s board of directors.  They managed to get the major party candidates for New York State Assembly and the U.S. Congress in front of the crowd for more than an hour.

Questions were earnestly asked, and the candidates gave pat and very predictable answers.  You come to Rockaway wearing blue, you pander to municipal workers.  If you’re a candidate wearing red, it’s all about helping small businesses.  That was easy.  Nobody has to tax their brains too much.  Blah, blah, blah.  Then, everyone applauds, and its on to the fifty-fifty drawing. 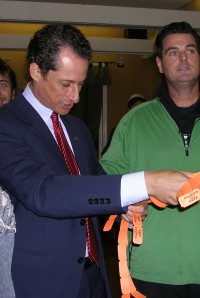 Maybe it was a metaphor for our political future:  more people win, but you get less.  Since volunteers had sold tickets for the fifty-fifty from two rolls with identical numbers, the unheard-of occurred–there were two winners!  Guess who was holding one of those tickets?  Our energetic young Democratic Congressman, Anthony Weiner!

As he graciously conceded his portion of the 50-25-25 to his co-winner, Weiner smiled from ear to ear.   I don’t know if he’s superstitious, but it could be a good omen about that election.

In his remarks to the crowd, Weiner asserted that money has too great an influence on our democratic processes, but added, rather optimistically, that he doesn’t believe our country is that “broken.” Then he switched to the pessimist mode in talking about Afghanistan, cautioning that “we are not going to be able to stamp out every inequity in the world.”  Given this dichotomy, what’s an idealist to do?

I believe, based on my life and career experience, that we must begin to forge a consensus on how to promote moral and fiscal accountability throughout the substantially frayed fabric of our society.  Massive structural changes seem to be required to root out badly ingrained, rather greedy and irresponsible habits in the housing, financial, education, medical and legal sectors.  Throw in professional sports, for good measure.  But how to get from here to there?  Legendary American novelist Mark Twain may have given us the answer:  “Habit is habit, and not to be flung out of the window by any man, but coaxed downstairs a step at a time.”

I’m waiting to see if any candidate has a clue on how to start the difficult process of saying NO to a lot of different people–red ones and blue ones.

You've entered the cyber-locale of Vivian Rattay Carter, a grant writer employed by Women's Housing and Economic Development Corporation in The South Bronx. I've lived and worked in the New York metro area since 1979, in diverse places like Astoria and Rockaway Beach (Queens), Kensington and Windsor Terrace (Brooklyn), Grand Street and Tribeca (Manhattan), and Norwood, Woodlawn, and Riverdale (The Bronx). I treasure the amazing parks, architecture, and cultural institutions of our multicultural city, as well as the musicians and music lovers who enjoy congregating here.
View all posts by rockviv →
This entry was posted in U.S. Government and tagged community, Congressman Anthony Weiner, Democratic Party, leadership, local news, meetings, NYC, politics, Rockaway. Bookmark the permalink.