“Bus Hill” IS Our Mount Snow!

Ok, so we don’t have the long, rolling hills of Prospect Park, and Fort Tilden is no Yellowstone.  But we do have Bus Hill, Rockaway’s version of a slope for ski-boarding and sledding. 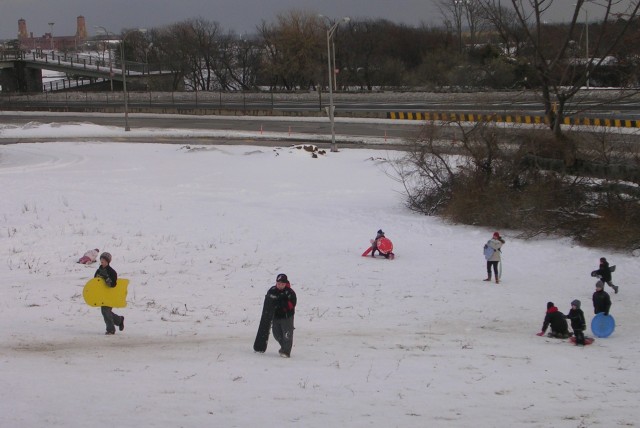 Wrapped inside the ramps of the Gil Hodges-Marine Parkway Bridge, it’s the favorite (let’s be honest, it’s the ONLY) winter sports destination on the west end of the peninsula.

In a few years, we may be able to add Edgemere Landfill to the list!  If you have tried sledding at Edgemere, Oy Vey Rockaway would love to hear about it!  More photos of fun at Bus Hill follow. 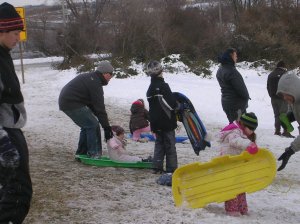 Good crowd for a school day!

Also, I’m posting a photo of what may be the ultimate “attractive nuisance” for children of the west end.

To adults walking by, there’s nothing attractive about it.  It’s a five-foot high snow pile located at Beach 129 Street and Newport Avenue, the main intersection between the block with the shops and the block with St. Francis deSales Catholic school.  While I was photographing it on Tuesday, two sanitation trucks with plows passed, and I pointed it out, thinking it would be gone by the end of the day.  It wasn’t.  As of Friday at 11:30 a.m., this icy “pillar of the community” is still there, with the little indentations made by kids trying to climb it.  I saw one who had managed to scale the peak over the weekend…it reminded me of the teen who was injured while climbing the sand dunes in Belle Harbor a few years ago.  I believe the city ended up with a lawsuit on that one.   I know it would be costly to remove all the piles of snow and ice that have accumulated, but the one at this particular location is a triple threat–an eyesore, an inconvenience and a danger that needs to be addressed before someone is injured.  I would do it myself if I had the equipment.  Any volunteers?

Be sure to pick up The Wave today, and check out my piece on the Sebago Canoe Club Frostbite Regatta, with some great photos taken by club members braver and better equipped than I, who ventured out for a paddle on Jamaica Bay last weekend.

Also be sure to read the news article and my commentary in “Rock Solid” about some new stores proposed for the Flatbush Avenue extension, near the Belt Parkway.  For those who can’t get out for the paper, and don’t have an e-mail subscription, I’ve posted my commentary, “Vandalia Dunes Are Gone, Is Four Sparrow Marsh the Next To Go?” on this blog, in the article that follows.  Are places like the one pictured below, just a short distance from these new proposed stores, worth saving, or would you rather have a new Sports Authority store?

You've entered the cyber-locale of Vivian Rattay Carter, a grant writer employed by Women's Housing and Economic Development Corporation in The South Bronx. I've lived and worked in the New York metro area since 1979, in diverse places like Astoria and Rockaway Beach (Queens), Kensington and Windsor Terrace (Brooklyn), Grand Street and Tribeca (Manhattan), and Norwood, Woodlawn, and Riverdale (The Bronx). I treasure the amazing parks, architecture, and cultural institutions of our multicultural city, as well as the musicians and music lovers who enjoy congregating here.
View all posts by rockviv →
This entry was posted in New York City Government, The Land We Share and tagged community, Edgemere Landfill, local news, recreation, Rockaway, weather events. Bookmark the permalink.