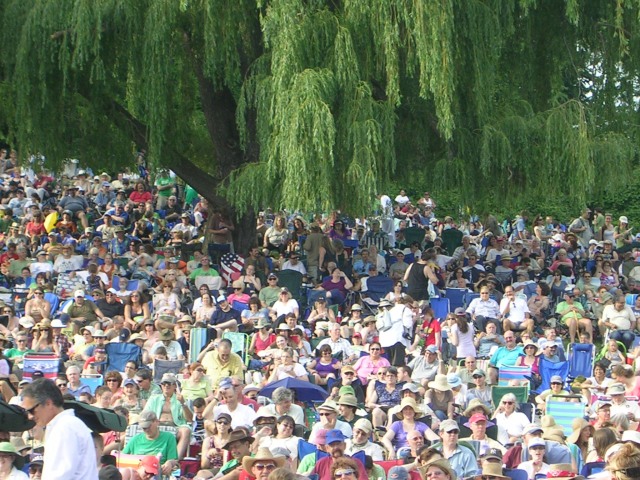 They say that rot is rampant in the social fabric, and all the heroes have died. A decade ago, columnist Russell Baker commented aptly that the few American heroes left in sports, politics and business all “came down with terminal feet of clay.”  How apropos to recent events, except that in today’s world of social networking, the clay usually tends to turn up in a part of the human anatomy other than the feet! No matter what they say inside the Beltway, we’ll miss you (even your “clay parts”), Congressman Weiner!  When it came to representing your district, they were made of steel… 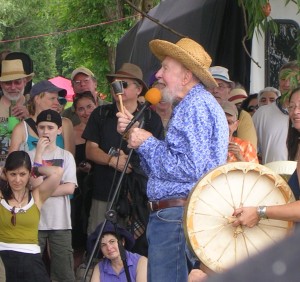 I’m happy to report that one hero is still standing tall on feet of iron.  At 92 years of age, Pete Seeger continues to tower over the annual music and environmental festival celebrating the mighty river—The Great Hudson River Revival, which broke attendance records this past weekend in Westchester’s Croton Point Park. Singing and walking from tent to tent, from the opening to the closing blessing of the river, Seeger endured the heat in his trademark straw hat.  And what a movement he has built!

Musical headliners like Suzanne Vega, Indigo Girls and Janis Ian propel the ticket sales, but as more than one of the performers commented, Seeger’s stealthy approach has always been to draw people in to the music first.  Once people are singing, activism follows.  The group can overcome any obstacle.  It’s been a long-standing observation of philosophers since the founding of the Greek civilization that the ruling class should pay attention to music.  Songs can be a powerful weapon of the working class. 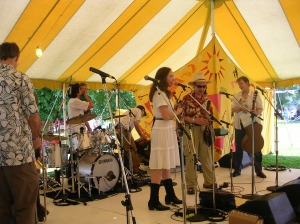 But song and dance are so much more.  They renew your connection to others, and to the need for cooperation.  One of my favorite hang-outs at the festival is the World Dance Stage.  It’s not Dancing With the Stars, or Rockaway’s version, Dancing Under the Stars.  But regardless of whether it’s klezmer, salsa, zydeco, or square dance, it’s always a scene. It’s almost as much fun to watch as it is to join in!  This weekend, there was even a Balkan brass band and Pakistani folk dancing.  But the standout in this year’s dance tent selections, for me, was Jay Ungar and Molly Mason’s Swingology set, complete with pulsing fiddles and driving horn and trombone solos. 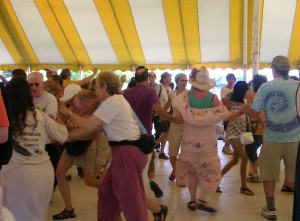 Klezmatics Kept it Fun in the Dance Tent!

On the vocal side, Janis Ian’s voice is better than ever. She was introduced by one of my favorite radio DJs, Jon Platt of WFUV.   Do you remember the song, At 17, with that memorable line about “those whose names were never called, when choosing sides for basketball?”  Believe me, you would have weeped to hear Ian sing those words so poignantly on Saturday.  “The Babysitter Song” an original heartfelt ballad by Dar Williams, was also a moving moment for many in the crowd.  Another was Chris Smithers’ funny, bittersweet commentary on fatherhood, delivered with perfect acoustic simplicity, a tune called: “I Don’t Know.”

I snapped some photos and passed by during the major Rainbow Stage events, which included Drive By Truckers and Arlo Guthrie, as well as Ian, Vega and Indigo Girls.  But I didn’t linger there too long. The only shade is under a big willow tree WAAY BACK, or in a verdant grove of trees covered with poison ivy on a hill that’s hard to the left of the stage.

I prefer the riverside Hudson Stage, which offers more options for shady relaxation.  That’s where a lot of the more mellow folkies hold court during the festival.

The biggest surprise and treat for me was during one of my wanderings around near the Working Waterfront area on Sunday afternoon. After sampling the Klezmatics’ crowded Sloop Stage performance, I headed for a set called “Sunday Spirituals” with Marva P. Clark.  As I found a place to stand at the rear of the tent, there was Seeger sitting right at my elbow, listening to the music. I quickly and instinctively snapped his photo, which I wasn’t really supposed to do without asking. Oops!  If I had asked (as others did shortly thereafter), the answer was “no,” so I guess I’m not going to beat myself up over it.  I got the picture.  Seeger’s presence so inspired me that I joined Clark at the mike when she asked for volunteers from the audience.

I figured, these are songs I sing in church all the time.  At least I know the words… For the rest of my life, I can say that I sang FOR Pete Seeger, not just WITH him!

The medium is the message 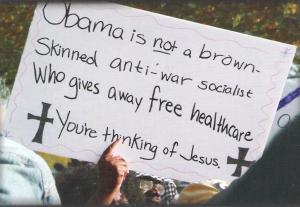 Postcard Available at the Festival

Petitions were passed around like popcorn boxes in a crowded theater.  Ban hydrofracking, close Indian Point, shut off corporate campaign contributions.  The place is such a hotbed of activism, you could spend the entire weekend just walking around reading clever t-shirts, buttons and bumper stickers.

One of the most attention-getting items at the festival was the “Poop Van,” designed to graphically illustrate opposition to the Town of Rye’s Long Island Sound sewage dumping practices. 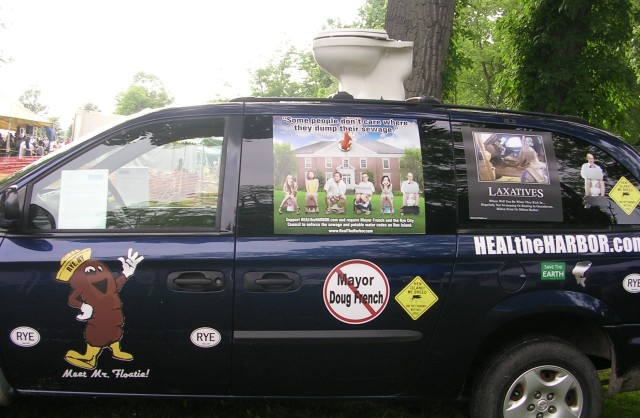 Another traffic-stopper was put up by B4PEACE. It was a 12-foot high poster with facts and figures on the historic expenditure of money and human lives in U.S.military actions, graphically superimposed on a colorful star-spangled, red, white and blue outline of an erect penis.  Makes you think.

Another simple, yet eye-catching tool was the Indian Point pin map, with a yellow string hanging from the plant’s location, marked with red dots representing each 10-mile interval of distance from the plant. The 50 mile dot falls out in the Atlantic Ocean, putting Rockaway within the Nuclear Regulatory Commission’s recommended evacuation zone, in the event of an emergency.  A display at the festival quoted Police Commissioner Ray Kelly’s response when asked by a Washington Post reporter about a proposed New York City evacuation drill in 2002.  He said: “Evacuation—what evacuation?  It can’t be done.”  Scary, but true, no doubt. 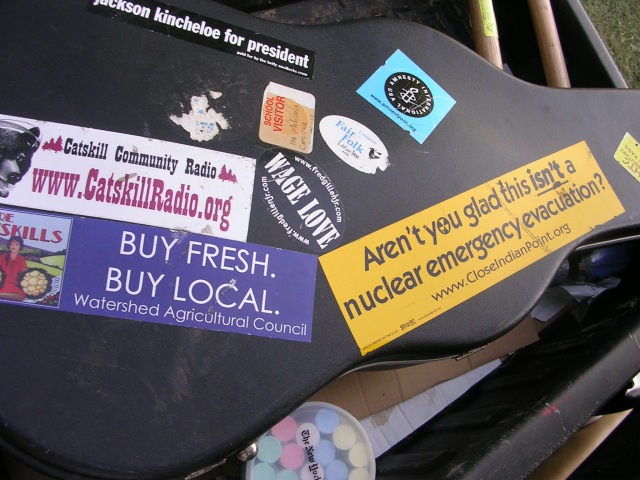 Musician for a Cause (Or Two!) 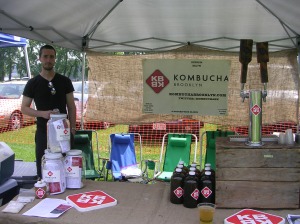 On the food front, a new feature was the Artisanal Food and Farm Market, with home-made locally sourced ice cream from The Blue Pig, fresh brewed tea and brewing kits from Kombucha Brooklyn, and Marla’s Kale Kitchen, among others.  Green Living Books had the most amazing display of inexpensively priced books on gardening, healthy cooking, sustainable living, and spirituality. Plus, there were the usual chances to see solar power systems up close, take a ride on an electric bike, or learn about green cleaning products.

Seeger closes out the festival with a song at sunset.

The festival closed with Native American songs and prayers near the river at 8:15 p.m. on Sunday, June 19.  I think I’ll be needing the inspiration to get me through the next several months, as the media and the machine politicians begin the process of slicing and dicing us into ethnic and interest groups, then telling us whom we should be voting for.  Did you notice, they never tell us WHAT we should be voting for?  For that, we need our heroes, like Pete…

You've entered the cyber-locale of Vivian Rattay Carter, a grant writer employed by Women's Housing and Economic Development Corporation in The South Bronx. I've lived and worked in the New York metro area since 1979, in diverse places like Astoria and Rockaway Beach (Queens), Kensington and Windsor Terrace (Brooklyn), Grand Street and Tribeca (Manhattan), and Norwood, Woodlawn, and Riverdale (The Bronx). I treasure the amazing parks, architecture, and cultural institutions of our multicultural city, as well as the musicians and music lovers who enjoy congregating here.
View all posts by rockviv →
This entry was posted in Meet Your Fellow Man, New York State Government, Philosophy, Religion and Philanthropy, Planet Earth, The Arts and Entertainment, The Land We Share, Water and waterways and tagged boating, community, Congressman Anthony Weiner, cooperation, Dance, Hudson River Sloop Clearwater, The Arts. Bookmark the permalink.