If you didn't see the Marine Parkway Bridge in the background, you'd never believe this is a shoreline within protected federal parkland.

It’s more than just a body of water or a marsh ecosystem–Jamaica Bay is an integral part of the environment in the Rockaways.  No matter how you enter or leave the peninsula, or spend your days here, you see the bay or you smell it.  Some even perform religious rituals near it.

Many are lucky to actually feel the water, while in a kayak, a fishing boat, or at one of the few bayfront swimming beaches.  Federal regulations today prohibit swimming in the bay, due to high fecal coliform levels.  If the quality of the water improves, perhaps we could swim in it again.  Historically speaking, swimming was banned in Queens County waters due to pollution as early as 1916.  It is said that the only prudent place to swim in the bay today is near the shores west of the Marine Parkway bridge, where the strong current and tidal action flushes impurities away.

Intense interest in Jamaica Bay has developed in the past few years, ever since the term “reach” entered our vocabularies, and the city’s waterfront planning efforts have accelerated.  The New York Times has given the bay lots of ink (even a full page with color photos in fall, 2011), and documentary filmmakers are floating about in various craft, shooting footage of the bay’s natural features and its restoration.

Dan Hendrick’s 2006 book, Images of America: Jamaica Bay, available from Arcadia Publishing, http://www.arcadiapublishing.com, is a good introduction (at just 128 pages) for anyone with a desire to learn more about the bay’s fascinating history.   Hendrick is presently working on a documentary with the working title, Jamaica Bay Lives! If you feel philanthropically motivated for Earth Day (or just have a tax refund burning in your pocket), Hendrick is  raising funds online to help pay for production of the film.  Or, you could make a contribution to the efforts of our Jamaica Bay Guardian, Don Riepe, who spent the entire weekend (yes, even in the pouring rain) supervising two huge cleanups around the Bay.

Recovery of the marsh islands has been a long saga, with efforts ongoing since 2006.  Persistence is the key element required to achieve anything, given the various layers of agencies in charge of the bay.  At times, it seems a small miracle that this ecosystem carries on at all.

Algae growth and corrosion show that this "lovely" has been gracing the shore at the cove for a long while.

The agencies with roles around the bay include the U.S. Army Corps of Engineers and the U.S. Coast Guard, the Port Authority of New York and New Jersey, the Metropolitan Transit Authority, New York City Parks Department, the National Park Service of the U.S. Interior Department, the EPA, the DEP, the DEC and the EDC (just scramble the letters and you get new permutations).  I’m probably forgetting some.

The transportation agencies try to keep the boats, trains, people and cars moving.   In an endless cycle, soil washes off the land into the water during storms, and silt eventually clogs harbors and shipping channels.  We lose the sand on our beaches in Rockaway, as well.  The U.S. Army Corps is the collector.  Scoop it up, lay it back on the land.

Over the past several years, major efforts have been undertaken to use the dredged materials to provide a substrate for new marsh grass plantings on various Jamaica Bay islands.  In fall 2010 and 2011, Colonel John Boule of the U.S. Army Corps of Engineers hosted boat cruises to show off his agency’s work to community activists.  In 2011, we were able to actually debark from the boat and see the work at the grassroots level.  Next year, I’m going to ask the Colonel to make a stop at Riis Landing to pick up the Rockawayites, so we don’t have to spend half the day traveling back and forth to lower Manhattan in order to join in.

Some of the Jamaica Bay marsh islands were created from landfill decades ago, like Canarsie Pol, which began life as a spot of dry land at high tide and is now enormous.  This is also true of Barren Island, which could be reached by wagon at low tide during the mid-1800s, and was later expanded to become the out-sized Floyd Bennett Field when a municipal airport was needed.

Other areas in the bay experienced the reverse–they were formerly huge expanses of marsh grass that shrank over the years.  These areas were literally drowned by massive amounts of excess water too rich in nitrogen to support a balanced ecosystem.  Man’s waste changes the water, so it only seems right to constantly adjust the imbalance.

We traverse the bay on bicycles, and in trains, boats and cars. Since the automobile came to reign supreme in the 1940s, the texture of life on the peninsula has not improved.  Beach Channel Drive is fortunately being saved from possible collapse through the efforts of various agencies who are rebuilding the bay wall structure that supports it.  Greg Clancy of the EDC, who is supervising that project, has pointed out that repair of the things we cannot see are often just as  important (or more critical) than the cosmetic repairs that are often given the lion’s share of media attention.

It’s a constant struggle to counter the “out of sight, out of mind” notion. We finally seem to be correcting the type of short-sighted thinking expressed in the 1880s, when developers bragged that the grand Rockaway Beach Hotel could accommodate 7,500  guests, while “all the refuse matter is discharged through massive iron pipes at a point distant four miles from the hotel, and is carried by direct currents into Jamaica Bay, without the possibility of a reflux to any portion of these shores.”  Those “distant” points were, at one time, the richest oyster beds imaginable.  Within two generations, they were polluted beyond repair.  In 1921, the shellfish beds were declared off-limits by health officials, after typhoid outbreaks in 1904 and 1915.

If she could ask for an Earth Day present, Jamaica Bay would probably cry out for a chance to repair herself.  Why not give her a rest?  While we spend millions reseeding marsh grass and planting a million trees, we also crow victoriously about adding thousands of housing units on the peninsula.   More housing, more people, more toilets, more showers, more dishwashers and washing machines. The treatment plants must work at full tilt to process it all. 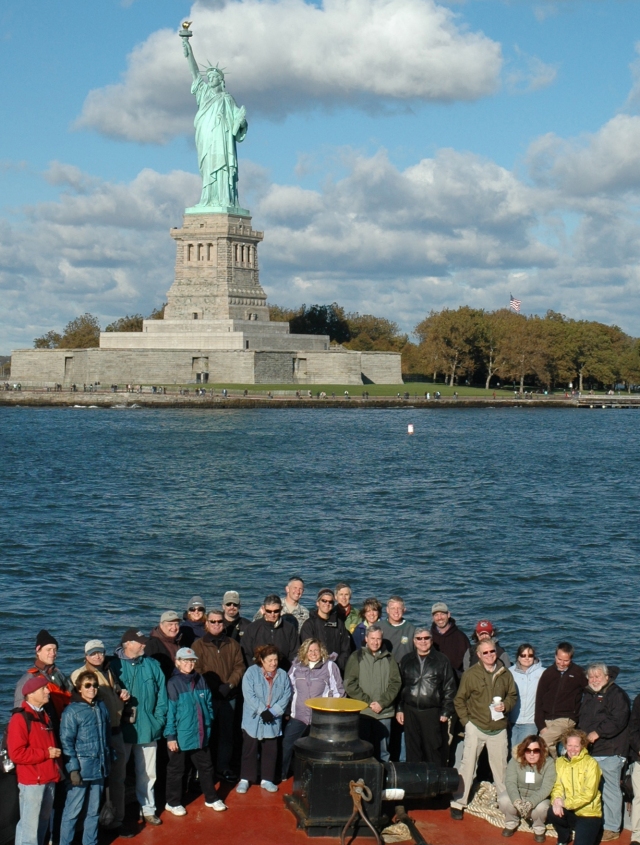 The U.S. Environmental Protection Agency’s informative pamphlet available online, called “Where Does All the Dirty Water Go?” is highly relevant advice for those of us who care about the health of our waterways.  It urges homeowners to avoid flushing or placing certain products into household drains OR street drains.  These substances should be captured in containers and disposed of in the garbage can (for indoor-type household products) or, in the case of chemicals and other noxious substances, at a hazardous waste facility (locations can be found online).  Products in this category include chemicals, motor oil and other auto fluids, lawn care products, paint and grease, beauty products such as hair dyes and straighteners, diapers, condoms and feminine hygiene products, and even shortening, butter and other cooking oils.  And of course, don’t dump your doggie waste in the street drains.

In the 1960’s, some U. S. waterways were so polluted that they spontaneously combusted, on occasion. When I was growing up in Cleveland, Ohio, they used to say that you could practically walk across Lake Erie due to all of the garbage in it.  We managed to bring our lakes, rivers and streams back from the brink via prudent government regulation, specifically, through passage and enforcement of the Clean Water Act of 1972.  Enforcement of this law is just as important today as it was in the 1970s.

Humans can survive for weeks without food, but only a few days without water.  Clean water is essential to life, on Earth Day, and every day.

You've entered the cyber-locale of Vivian Rattay Carter, a grant writer employed by Women's Housing and Economic Development Corporation in The South Bronx. I've lived and worked in the New York metro area since 1979, in diverse places like Astoria and Rockaway Beach (Queens), Kensington and Windsor Terrace (Brooklyn), Grand Street and Tribeca (Manhattan), and Norwood, Woodlawn, and Riverdale (The Bronx). I treasure the amazing parks, architecture, and cultural institutions of our multicultural city, as well as the musicians and music lovers who enjoy congregating here.
View all posts by rockviv →
This entry was posted in New York City Government, The Land We Share, U.S. Government, Water and waterways and tagged community, Gateway National Recreation Area, Jamaica Bay, NYC, NYC Parks & Recreation, Rockaway, Rockaway History, transportation, waterfront access. Bookmark the permalink.