Living Fossils Among Us 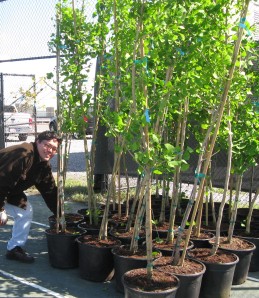 Here’s a cool story:  I helped find good homes for 30 living fossils in April.  Really, I did. The Rockaway Civic Association gave away 100 free trees donated by the New York Restoration Project and Million Trees NYC.  About a third of them were 10-foot high gingkoes, called “living fossils” because they date back to the age of the dinosaurs, and have survived virtually unchanged since that time, to grace the streets and parks of New York City.  Working hard each day to absorb rainwater through their roots, filter pollutants from the air, and reduce the temperatures of our sidewalks and homes.  How much we take them for granted. 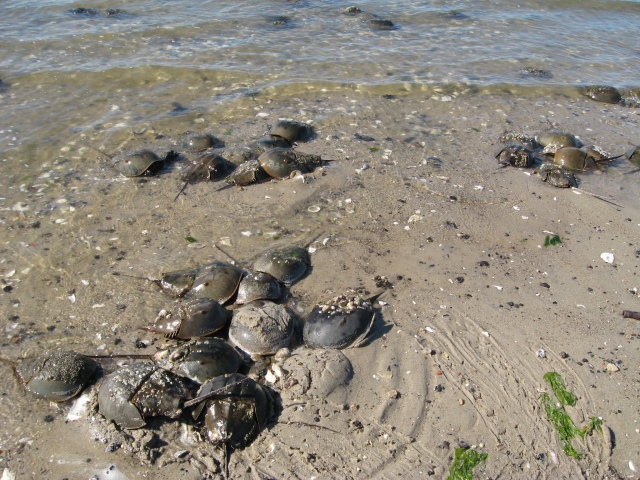 Around Jamaica Bay, we have other living remnants of prehistoric times.   The horseshoe crab is another magnificent example.  Every year at this time (during the full and new moons in May and June), they bob on up to the shorelines in their persistent quest to reproduce, as they have done for almost 350 million years.  The smaller males attach to the back and sides of one large female, either alone or in a group of up to a dozen satellite males around the female.  After she burrows into the sand to lay a cluster of about 4,000 small, grayish-green eggs, the males release sperm to fertilize the cluster.

A cluster of horseshoe crab eggs.

One female horseshoe crab lays about 25 such clusters annually, for a total of about 100,000 eggs a year. Out of one million eggs, only about 30 larvae survive through the first year after hatching, and they don’t grow that quickly.  A year-old juvenile still fits on the tip of your finger. There is an extremely low hatching rate for larvae, in part, because at least 11 species of shorebirds rely on horseshoe crabs eggs as their primary food supply during their annual northward coastal migration. 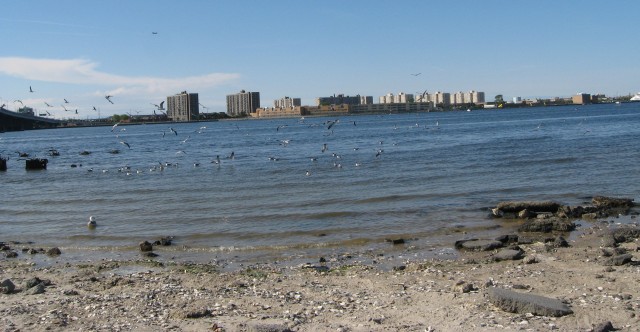 Shorebirds hover on the morning after the May new moon, waiting to feast on the horseshoe crab eggs. Chunks of asphalt dumped illegally on the shoreline can be seen.

For further information on this species of arthropod and to support conservation efforts on its behalf, visit the website of the Ecological Research & Development Group, http://www.horseshoecrab.org. For the best local, in-person introduction to the horseshoe crab, sign up for a program conducted by Mickey Cohen or Don Riepe of the Northeast Chapter of the American Littoral Society.  Riepe chairs the chapter and Cohen was a founding faculty member of the top-flight oceanography department at Beach Channel High School in its heyday, where he supervised student research projects on these organisms.

Aside from their critical contribution to the food chain of coastal areas, three major medical advances have been made as a result of scientific studies of the horseshoe crab:

(1) Scientists studying the optical nerve of the horseshoe crab were awarded the Nobel Prize for Medicine in 1967, as the research was deemed a critical contribution to an understanding of how the human eye functions;

(2) It was learned that a substance from the organism’s shell, called chitin, can be used to coat surgical sutures and wound dressings used on burn victims, to speed healing rates by 35-50%;

(3) Finally, this living fossil’s most valuable contribution to the human race was made when scientists realized that, lacking an immune system, the creature uses endotoxins as an effective defense against infection. Endotoxins can withstand steam sterilization, so it is critical to test for them when injectable medications are being produced by the pharmaceutical industry.  It was found that a highly reliable endotoxin test could be created by producing a reagent from an extract of the crab’s blue, copper-based blood cells. This reagent is called LAL (“limulus amobocyte lysate”).  Here on the northeast coast of the U.S., horseshoe crabs are regularly gathered by the pharmaceutical industry so their blood can be harvested in laboratories, and then they are later released, all under strict government controls.

There are major threats to these useful creatures, and their populations are on the decline.  I heard from one source recently that the numbers may have dropped by over 80%. This is due to two major causes:  Habitat alteration (or complete destruction) has occurred in some places.  Even changes to the slope of a beach can affect their chances for survival.  This occurred at Plumb Beach, a major spawning area south of the Belt Parkway between Sheepshead Bay and Flatbush Avenue.  Another spawning location is in a tiny marsh near the Broad Channel ballfields due west of the Cross Bay Bridge.  A load of enormous asphalt chunks dumped illegally on that shoreline many years ago creates a serious obstruction to spawning.  When the crabs have to crawl over and around these chunks of man-made material, there is a risk that they will flip over and get stuck upside down.  This can cause their gills to dry out, making them vulnerable to predatory shorebirds that will eat them alive. Also, horseshoe crabs are collected in large numbers by commercial fishermen and cut up as bait for use in eel traps.  This practice is now illegal in some, though not all, coastline states, but it still has been known to occur here on Jamaica Bay.

Swirling trails in the sand like these have existed on Earth for 350 million years.

I am in awe of these amazing living fossils—the gingko and the horseshoe crab.  Our tenure on the planet has been short, in comparison to theirs.  Best guess–they probably will outlive us all.

You've entered the cyber-locale of Vivian Rattay Carter, a grant writer employed by Women's Housing and Economic Development Corporation in The South Bronx. I've lived and worked in the New York metro area since 1979, in diverse places like Astoria and Rockaway Beach (Queens), Kensington and Windsor Terrace (Brooklyn), Grand Street and Tribeca (Manhattan), and Norwood, Woodlawn, and Riverdale (The Bronx). I treasure the amazing parks, architecture, and cultural institutions of our multicultural city, as well as the musicians and music lovers who enjoy congregating here.
View all posts by rockviv →
This entry was posted in Creatures of the Planet (Non-Human), Horseshoe crabs and tagged environment, Jamaica Bay, science. Bookmark the permalink.