“We Used to Vacation” and Other Lost Summer Rituals

I headed into the kitchen for my morning coffee, and flicked on the radio.  A song recorded by The Cold War Kids was on, called We Used to Vacation. A great lost summer ritual.

In the past week, I’ve been thinking a lot about my father in his heyday, presiding over the planning and execution of our summer camping trips all over the East Coast.  We ultimately moved up to a Winnebago, but in the beginning, he built a padded wooden frame in the back of the pick-up truck, where we all could sleep like sardines in a can. In his prime, Dad built lots of things, like a basement “rec” room, an enclosed porch, and a 2-car garage with an attached carport.

He’s now tottering, with Parkinson’s Disease. Mom has been taking care of what’s left of his mind and body. He doesn’t speak much, having descended into an interior world and closed the blinds. I am sad that I cannot talk with him on the phone about recent exciting events in my life.

Dad always made it a point to set aside enough for a summer pool membership for the family.  A luxury item here in Rockaway, admission to the community pool was within the reach of working class families in many places during the 1970s. Vivid memories of Friday night teen swim parties come rushing back to me.

Dad had a job with Alcoa.  We waited expectantly for the company picnic each summer. From sack races to corn-on-the-cob and Dixie cups, Cold War kids were easy to please.  Children now require fancy frozen fruit or coffee concoctions as summer refreshers, with a dozen flavoring choices. Dixie cups came with two ice cream flavors in the same container.  You don’t like chocolate?  Just eat the vanilla side, and don’t bother me about it! Child-rearing was so much simpler, then. 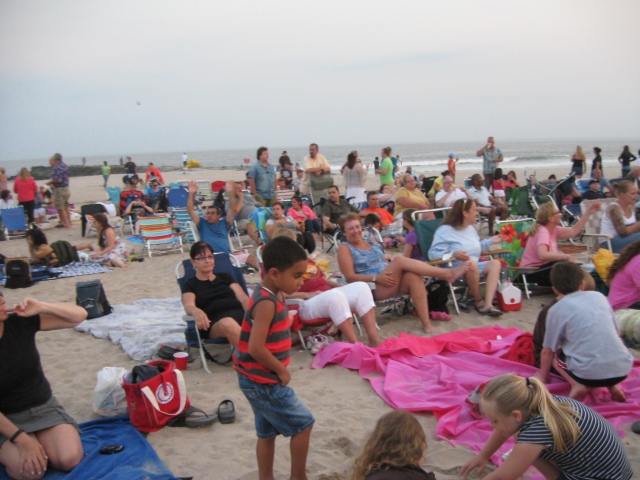 The Beach Flix Crowd on June 28.

Many Cold War kids probably share my recollection of seeing Snow White or  101 Dalmatians from the back of a station wagon, clad only in pajamas. That scene is being recreated by the Rockaway Civic Association’s free Beach Flix outdoor movies.  Be at the next show, and you are sure to smile. Schedule’s at www.beachflix.com.   Nowadays, one thing IS clearly better–the sound.  Those little box speakers you hung on the car windows at drive-in theaters had the worst sound, ever.  The Beach Flix sound equipment is top of the line.  The last show of the summer will be members’ choice.  Join so you can vote for your favorite classic film, at www.rockawaycivic.com. Picnics are welcome; just be sure to dispose of your trash when you leave the beach!

Jason Marr of Hip to Hip as Hamlet.

Another very special outdoor event new to the area will occur on July 28 and 29.  A leading Shakespearean troupe from Woodside, Queens will do free performances of  Comedy of Errors at Riis Park Bathhouse on July 28 at 7 p.m., and Hamlet, on Sunday, July 29 at 7 p.m. at O’Donohue Park in Far Rockaway. You can find out more about this fine group at www.hiptohip.org.

My book, Images of America: Rockaway Beach, was featured as the cover story of the June 29 Forest Hills Ledger guide to cultural happenings in Queens. www.timesledger.com.  I will do a book signing on Sunday, July 7, from 10 a.m. to 1 p.m., at the Country Heart Diner (in the main Breezy Point shopping plaza), where they make excellent veggie omelets, and have a retro lunch counter with those round, rotating, high pedestal seats that kids love. On Saturday, July 7, and Sunday, July 8, from 1-4 p.m., I also plan to sell and sign books at the Ft.Tilden arts complex and at Riis Landing when the afternoon ferries arrive and depart.

Fellow Rockaway author Kevin Stokes was at the Wharf for the Father’s Day book signing event.

I will do an Author Talk at Seaside Library, Rockaway Beach Blvd. and Beach 115 Street, on Monday, July 16 at 6 p.m., speaking about the pioneers who established this community, showing images with the projector, and selling and signing my book.  I will also be offering Rock Viv Tours, later in the summer and fall, in conjunction with Queens Historical Society.   Hope you will join us! 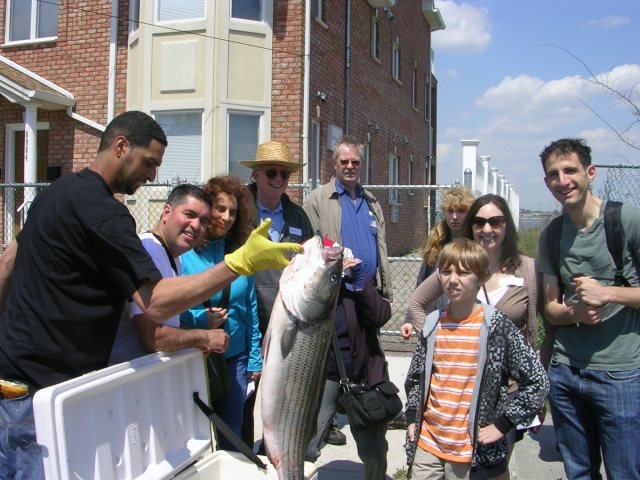 You've entered the cyber-locale of Vivian Rattay Carter, a grant writer employed by Women's Housing and Economic Development Corporation in The South Bronx. I've lived and worked in the New York metro area since 1979, in diverse places like Astoria and Rockaway Beach (Queens), Kensington and Windsor Terrace (Brooklyn), Grand Street and Tribeca (Manhattan), and Norwood, Woodlawn, and Riverdale (The Bronx). I treasure the amazing parks, architecture, and cultural institutions of our multicultural city, as well as the musicians and music lovers who enjoy congregating here.
View all posts by rockviv →
This entry was posted in Business and Economics, The Arts and Entertainment, The World of Human Beings and tagged community, local news, recreation, Rockaway, Rockaway Civic Association, Rockaway History, The Arts, writing. Bookmark the permalink.