Starbucks Arrives on the Rock, In a Way

They’ve finally made their way along the North Atlantic Flyway–Starbucks Cups Have Arrived on the Rock!

Somehow, they are getting to the peninsula—those ubiquitous Starbucks coffee cups.  The $6 Joe can’t be purchased locally, but we have become a “privileged” repository of the brand’s classy paper receptacles, and trash of various other kinds.  Everyone’s starting to notice the volume of waste being left behind every hot summer day. Turns the “leave no trace” slogan of the National Park Service on its head.

If trash cans are full, please take your trash to the next receptacle that is not full–even if it’s at your home! 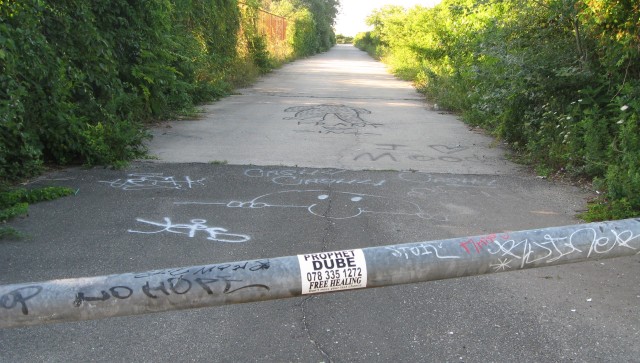 Do they deliver pies out here?

A casual stroll behind the RAA galleries at Ft.Tilden on Sunday, July 22, 2012, turned up pizza boxes, coffee cups from stores we don’t have in Rockaway, and extensive vandalism of signs and roadways.

When visitors from near and far have no respect for the fences, walkways or overflowing conditions of trash cans at Ft. Tilden or along the Rockaway Beach boardwalk, it doesn’t surprise me that destruction and theft of piping plover nest eggs has followed.

Disrespect for property has always been found to lead to other types of law-breaking.  I consider it a privilege to live in one of the last seafront bastions of the tiny, harmless piping plover (there are fewer than 2,000 nesting pairs left on the Atlantic coast, according to the U.S. Fish and Wildlife Service).  This bird has been pushed to the brink by short-sighted and greedy over-development of shore front areas.  I really don’t find it amusing when local characters make juvenile jokes that “piping plover tastes like chicken,” and “it’s good on the BBQ.”  Likewise, I was horrified when an area “waterfront activist” who has been the recipient of  environmental education grants suggested at a 2009 public meeting that people are more important than birds, so we should just run the boardwalk over the plover nests!  Maybe that’s the nature of our society today–man always comes first.

If there is no enforcement of the littering, vandalism or pooper scooper laws, good luck to endangered species.  As William Shakespeare wisely wrote in his play, Measure for Measure:  We must not make a scarecrow of the law, setting it up to [frighten] the birds of prey, and letting it keep one shape till custom make it their perch and not their terror.”

Looks like the body of laws that protects the health and safety of our public spaces is becoming a scarecrow.  A scarecrow covered with flocks of ignorant, careless, selfish, lazy, perching birds.  If we look away and say nothing, we are living in denial.

Put out a welcome mat for park visitors? I’d prefer to quote the sign that hangs over the bar at Rogers Pub: “Be Good or Be Gone.”

You've entered the cyber-locale of Vivian Rattay Carter, a grant writer employed by Women's Housing and Economic Development Corporation in The South Bronx. I've lived and worked in the New York metro area since 1979, in diverse places like Astoria and Rockaway Beach (Queens), Kensington and Windsor Terrace (Brooklyn), Grand Street and Tribeca (Manhattan), and Norwood, Woodlawn, and Riverdale (The Bronx). I treasure the amazing parks, architecture, and cultural institutions of our multicultural city, as well as the musicians and music lovers who enjoy congregating here.
View all posts by rockviv →
This entry was posted in Creatures of the Planet (Non-Human), piping plovers, The Land We Share and tagged Ft. Tilden, Gateway National Recreation Area. Bookmark the permalink.

4 Responses to Starbucks Arrives on the Rock, In a Way