Is the Mailbox About to Become Obsolete?

It used to be the largest employer in the United States.  Until Walmart began its explosive growth in the late 1990’s, the U.S. Postal Service, with a workforce of over a half-million (and, incidentally, the largest motor fleet in the world, as well), was on top.  The wages and benefits package and union protection offered made postal jobs a smart choice for those without college degrees, even if complaints of poor employment relations practices and actual incidents of workplace violence led to coining of the expression “going postal” to describe an employee violently reacting to workplace stress, in the early 1990’s.

The major taxpayer subsidy that allowed the postal service to deliver millions of letters, from coast to coast, for less than a quarter, seemed like an essential part of our democratic system.  It lasted until the early 1980’s.  It had a surprisingly long run, allowing political campaign committees and the American magazine industry to flourish at highly subsidized mailing rates.

In a world enamored of electronic communications, what does the future hold for U.S.P.S.?  Since before the Revolutionary War, it helped to pioneer not just mail delivery, but the concept of the postal road for carriers on horseback, the pony express, stage coaches, roadways, railroads, and finally, the wide use of motor vehicles for mail delivery, starting at the turn of the century.

If our elected leaders decide to get rid of the public post office concept, will the wealthy be the only ones who can afford to send a hand-written note or small box?  For about $3 per package, I am now able to mail a copy of my Arcadia book across the country by U.S. Post Office media mail, and it arrives in about 4-5 days.  It would cost much more to ship it by private carrier, no doubt.  The postal service still offers Every Door Direct Mail (EDDM), an amazing bargain for any business or other organization looking to communicate with residents in particular zip codes.  Without thinking about it too much, we have, as a society, been relying on inexpensive mail service as an economic engine for the communications essential to democracy and to maintaining the fabric of our family networks and other social units. Well, at least until Facebook and Twitter came along… 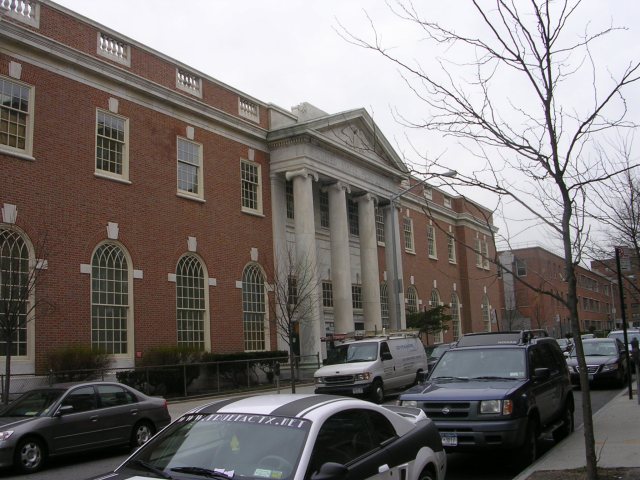 The post office created jobs and built landmark architecture in cities and towns throughout the United States.  In many small towns, the post office is the only distinguished landmark building left in the downtown business district.  One of my favorites is in downtown Jamaica, Queens.  The Far Rockaway post office on Mott Avenue is also architecturally distinguished enough to have been placed on the National Register of Historic Places, an honor shared with only a handful of other sites on the peninsula. The Post Office has already begun selling off some of these landmark buildings. For more information, visit this link: http://www.uspspropertiesforsale.com/ Also, don’t miss this great source of information culled by an NYU professor who loves the post office:   http://www.savethepostoffice.com/

Once the buildings go, job consolidation follows. Do bricks and mortar and good working class jobs still matter in our society?  I, for one, certainly hope that the public maintains its ownership of these beautiful buildings.  As to services, price increases would surely occur, with privatization.  It seems to me that the major competitors to the post office, Federal Express and United Parcel Service, will be able to charge even more if the post office goes away. No more birthday cards from Mom!

A “National Day of Action” rally to bring attention to the plight of the post office and its workers is set for Sunday, March 24, 12 noon, at the historic New York City General Post Office, 31st Street and 8th Avenue, NYC.  The rally is supported by numerous labor unions and other progressive organizations. Flyer with details is attached.  SA POSTAL DEMO NATIONAL DAY OF ACTION BEST.

I bet you didn’t get a copy of it from your mail carrier–now did you?

You've entered the cyber-locale of Vivian Rattay Carter, a grant writer employed by Women's Housing and Economic Development Corporation in The South Bronx. I've lived and worked in the New York metro area since 1979, in diverse places like Astoria and Rockaway Beach (Queens), Kensington and Windsor Terrace (Brooklyn), Grand Street and Tribeca (Manhattan), and Norwood, Woodlawn, and Riverdale (The Bronx). I treasure the amazing parks, architecture, and cultural institutions of our multicultural city, as well as the musicians and music lovers who enjoy congregating here.
View all posts by rockviv →
This entry was posted in Business and Economics, The Built World, The World of Human Beings, U.S. Government and tagged demonstrations, National Register of Historic Places, NYC, Rockaway, Rockaway History, U.S. Postal Service. Bookmark the permalink.

2 Responses to Is the Mailbox About to Become Obsolete?